From MicroWiki, the free micronational encyclopædia
(Redirected from Esse)
Jump to navigation Jump to search
Not to be confused with Essian Commonwealth or Esse (colony).

The successor of the original Essian Commonwealth, the Confederation of Esse traces its roots to the dissolution of the Federated States of America. Esse gradually rose to become the foremost Houston sector micronation politically, diplomatically, and culturally. The Commonwealth claimed land internationally recognized as territory of the United States of America, claiming land in three U.S. states - Texas, Tennessee, and Wyoming - and boasting a population of 20 as of December 2017. Essian territory was divided between the Commonwealth and a shared territory with Uberquiesenberg, with which its former lands eventually merged to form the Uber-Essian Union.[1]

"Esse" is most known in the English-speaking world for its relation to the Spanish and Latin languages. In the former, many know "Esse" as being pronounced as "Ese," with the second "e" using the vowel "a" sound. This is a common misconception over the pronunciation of "Esse," as the state clarifies it to be pronounced akin to the letter "S" is, "ehs."

The demonym used both to describe something belonging to Esse and in the noun for (referencing a person from Esse) is "Essian." The demonym was legally used in the nation's full name, the "Essian Commonwealth." 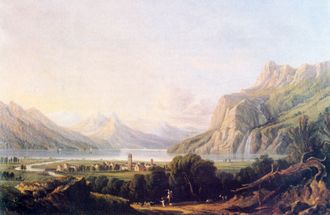 A painting of Walenstadt, the location of the original claim of the Commonwealth of Esse.

With the ratification of the Essian Instrument of Government nearing completion, elections were held for the head of state, the Lord Protector. Clémens was the only candidate, and won the election unanimously. While serving in this post he began to push for political development of Esse, though the other members of the micronation lost interest and soon were assumed to have left and renounced citizenship.[2]

In December, the former members of the Federated States - led by Henry Clémens - assembled in hopes of reincarnating the micronation which had passed earlier in the year. Work was done over the Christmas holidays to agree on a Constitution and structure. Despite wishes on the contrary by Clémens, other members including Brandon Wu and John Churchill insisted that the group choose a new name. The name chosen was the Atlantic Commonwealth, and the territory formerly occupied by Esse became part of the Capital district, with Clémens as its Council Deputy.

Clémens dissolved the Commonwealth on 5 May 2016 after the other citizens had lost interest several months prior. Essian territory was eventually annexed by the State of Koss following the coups in the territories held by the Realms of Valdsland and Grand Duchy of St.Clemens. Clémens was pronounced Prince Henry of Valites by the Anax of Koss. There, he formed what eventually would become the modern capital of Esse, Reme. A chunk of Valites was thereafter ceded to the Kingdoms and Lands Represented in the Council of the Triarchal Crowns of the Disciples on 28 August, creating the Mercian Dominion of Esse.

In December, due to inactivity, Clémens was stripped of his Kossian citizenship and Valites was ceded back to the United States of America. Only shortly after, Clémens returned to micronationalism. Following Clémens' return to micronationalism, the the Commonwealth of Esse was reformed. The recognized date of restoration became 27 January 2017.

On 20 March, James Reginald Frisch was appointed to serve as the Commonwealth's inaugural Heaminister; the Codes a Clementine, the fundamental delegatory document of Lord Henry's reign, was ratified shortly after. Political tensions within the nation grew to all-time highs as the Beiwing court decision was a failure.

At this time the Frisch administration began to rapidly expand the nation's diplomatic relations. The Galveston summit saw the Treaty of Evansberg as its result, which saw the State of Galveston become a military protectorate of the Commonwealth. Shortly following, the Treaty of New Halyards was signed, which transformed Newton County into a jointly-administered county of Esse and Uberquiesenberg. The latter state also became a military protected state of the Commonwealth.

The June 2017 general election saw the Green Party of Esse win a majority of seats in the Parlamenzalochas and establish the Second Frisch administration following Frisch's supermajority reelection. The minority party, the Democrats, suffered a major loss and would continue to struggle due to inactivity for several months after.

Beginning on the weekend of 25 August and continuing through the next week, Esse was struck by Hurricane Harvey,[3] marking the fledgling micronation's most catastrophic weather event. The Palazzo del Clement declared a state of disaster for six of the state's eight counties, the first being New Halyards, which sustained minor damages upon the storm's landfall only 18 miles northwards. Flooding throughout the region affected not only Esse, but also Zenrax, Paravia (through the State of Galveston), and Uberquiesenberg (through New Halyards).[4] Hurricane Harvey was later declared the costliest Atlantic hurricane in recorded history.[5]

Following Frisch's resignation in November 2017, Lord Henry took over the Heaministership in interim fashion and formed the Commonwealth's third government. At the January 2018 election, Tarik Kârjasary was elected Heaminister and the Democrats received a supermajority in a reduced Parlamenzalochas.[6] Constitutional reforms were implemented early into Kârjasary's term, and with them, the political system of the Commonwealth was entirely re-organized. Among the main changes, the Essian monarchy became elective, and a parliamentary system replaced the absolutist form of government that had been in place since the Commonwealth's foundation.

In early February, the Lord Henry announced intentions to dissolve the Commonwealth, beginning with a referendum on potential dissolution on 10 February, which passed with 75 percent support. Over one month later, the "Farewell Act" was passed with a majority of votes in the Parlamenzalochas, immediately dismantling the Commonwealth.

On 30 April 2020, the Essian Commonwealth was formally reestablished as the Confederation of Esse. Though legally reestablished with the same territorial claims as its predecessor state, an immediate string of decrees rescinded various claims and left the Confederation with two cities: Reme and the newly-established San Bernardo. On 1 June, the Reme Treaty of Union was signed, merging Esse and the Palatinate of Uberquiesenberg into a single micronation, the Uber-Essian Union. Shortly thereafter, the 2020 Constitution was ratified, further expanding on the ideology of Tarik Karjasary's political reformations two years before.

Patrick Renwick was appointed Lord-regent on 31 December 2020 amid Lord Henry's announcement of another indefinite hiatus from the micronational community. Patrick served primarily as a caretaker, and continued to serve in the role even as Henry returned to his role in a reserved capacity in 2022.

Lord Henry issued his first decree in nearly two years on 6 September 2022, announcing that Reme - the capital of Esse for virtually its entire existence - was being rescinded. As a result, San Bernardo became the new capital of the Confederation; shortly thereafter, a new territory known as New Clemensland was established.

A Microball by Tarik Karjasari featuring Esse, Sabia and Verona, and Abelden (2018).

Essian culture has evolved drastically though its history. The various shifts in the cultural dichotomy of Esse are largely synonymous with the state's political eras; for example, the first Commonwealth of Esse (2015-2016) and the Essian Commonwealth (2017-2018) are largely culturally distinct from one another.

Despite cultural differences between all political eras of Essian history, the widest cultural divergence within the Essian people is between the Commonwealth era (2015-2019) and the present Confederation era (2020-present)