The ESRI was established in 8 September 2020 by a Royal Decree as a civil organization encouraging deeper studies and scientific accuracy, as long as retaining an open mind, of astronomy, cosmology and physics, and it represents Ebenthal in all matters and negotiations regarding the space.[1] The ESRI is responsible for the acquisition and administration of observation objects and sub-orbital capacity artifacts, record studies and observations, in addition to maintaining two observatories.

The ESRI science is focused in observing galaxies, clusters, stardust forms and potentialy habitable moons of Saturn and Jupiter, and studying the search for extraterrestrial life, potentially habitable planets and black hole physics. In 2021 the ESRI joined the International Aerospace Community.[2] 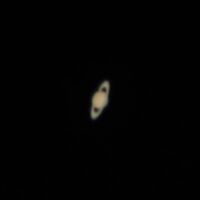 Reversed polarity and digitally imaged image of the planet Saturn's shadow over Jupiter, viewed through a reflective lens at an appropriate angle. 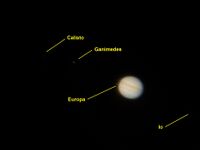 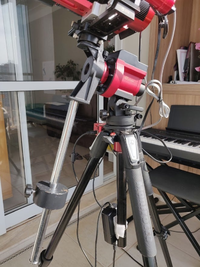 This mission, officially called Observation of Saturn No. 1, more commonly referred as "Saturn's Shadow", was focused on observing the planet Saturn's shadow while passing in front of Jupiter in a view perspective, during a rare alignment. The mission took place in 21 December 2020 at the Princely Observatory of Lyns at the province and city of Lüttenbühl. Coordinated by the then Prince of Altentupiland, Reinaldo I, the Telescope No. 2 was used. On the images collected and later assembled, Saturn's shadow was used to calculate its circunference, angle and speed. All informations were stored at the archives of both the Princely Observatory as well as in the Royal Observatory.

As the mission was a success, plans were developed for a second mission focused on Jupiter and Saturn, but this time, more precisely, on their moons, specially Europa, Titan, Io and Enceladus.

The Greek Moons mission, officially called Observation of Jupiter's Main Satelites, more commonly known as "Greek Moons", has as goal to photograph the planet Jupiter's most notorious moons of Europa, Io, Ganymede and Callisto. The mission was carried out in 11 June 2021 at the Royal Observatory in Malmünd by the operator and Ebenthali citizen Marcelo de Franco under King Arthur's request. The image taken, associated to the known circunference of the respective moons, allowed for the calculation of the distance between each other at the moment the photo was taken which subsequently served for the calculation of the moons's velocity circling the giant planet.[2]

The mission was considered a success and the next observation mission shall be focused on Saturn's moons of Titan and Enceladus.[2]

As the institute was created, it has planned the construction of a small rocket capable of reaching the thermosphere, that is, making a sub-orbital flight, which will be called 1º Foguete Sub-Orbital do Reino de Ebenthal or abbreviated as 1FSORE (English: First Sub-Orbital Rocket of the Kingdom of Ebenthal). The project was envisioned and is to be put in place by King Arthur II of Ebenthal which is also a mechatronics technologist assisted by his father Armando, 5th Baron of Roches, and his former digital electronics professor, Dr. Ruy Fernandes, Baron of Lins.

The main feature of Ebenthal's space research is observation of the stars, mainly galaxies, clusters and the arms of the Milky Way and of the potentially habitable moons in the solar system and their hosting planest. These observations are recorded and cataloged, as well as any changes in the position of stars predetermined by the observatory. From the observations, the institute's personnel is able to study celestial bodies's positions, distance between each other, their velocities and radius. From its establishment, ESRI has a unilateral agreement with the Brazilian Space Agency to alert it to any possible astronomical discovery.

Another part of ESRI's research efforts focuses on studies of potentially habitable planets and moons and the development of technology to reach them, as well as the study of the possibility of extraterrestrial life. Through the analysis of data collected by the various space agencies in the world, hypotheses are often raised on these subjects. The study of quantum physics, especially related to black holes, and the study of the life cycle of stars are also part of ESRI's academic basis.

ESRI currently runs two observatories. The Royal Obervatory, at the Palace of Rochesburg in Malmünd and the Princely Observatory of Lyns in the homonymous city. Together, they have three relatively high-powered telescopes, as well as collections of Atlas of astronomy and a advanced solar system model with every known celestial body within it.[1]