Not to be confused with Holy Violet Church. Check out the disambiguation page for more information. 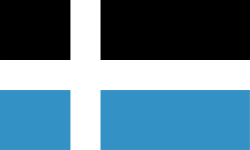 Flag of the Kingdom of Bradonia, the current holder of the Holy Bradonic Violet Church

Around February, The Primate H.H recognized the conversion of HGM Brady I, King of Bradonia, after the Bradonian nation state got very interested within the Holy BViolet Church due to the King's everlasting love of the color purple, this was the first conversion since Lluis Esteve Y Rando's, which took place on 19 November 2016 and more than five years have passed between the two conversions. March 1 saw a completely unexpected statement that His Holiness Hyacinth announced his intention to resign from the primatial office, H.H said he wanted to resign in favour of Brady Griffin, as it was clear Brady wanted the position of Primate with Griffin, stating "it has always been a dream for me to lead such a church, as I do not desire the church to fall waste once again" and was given to him on March 7, making him the 1st primate of the Holy Bradonic Violet Church as the Holy Violet Church was at this point reorganized.

On 7 March 2022. His Holiness Hyacinth, by publishing his second Decretal Constitution (called Derrièira Annada : "The Last Year"), which announces his renouncement of the Primatial fonction, in favour of Brady Griffin (recently) and which codifies his entry in emeritus. This is his last pontifical document. Brady Griffin officially accepts his appointment as the new Violettist Primate, and took the pontifical name of Daniel but later changed it to Rukuanth as it sounded better. The Holy Violet Church becomes the "Holy Bradonic Violet Church", however there was a problem, due to Primate H.H signing an agreement with the Republic of Luminor, the church was legally bounded, a deal was going to made, but then realizing how much he would lose from such a deal, decided to revoke the agreement and declare the church absolutely independent from Luminor rather opting to annex it into the Bradonian Kingdom as a secondary religion, however this caused a quick schism in where a branch of the Holy Violet Church declared independence from Bradonia, however this seen by the Bradonian leadership of a necessity, as it will allow both churches to go both ways and it will allow Bradonia to do what it please's while the Holy Violet Loyalist's can do what they please, all in all Bradonian leadership view's this as a favor. Today the Holy Bradonic Violet Church is the secondary religion of the Kingdom of Bradonia and remains so to this day. Since March 2022, Brady Griffin has the pontifical name of Rukuanth .

The Saint book of the Holy Violet Church is the Violet Odyssey. This text is believed to have been revealed by the Violet God to Babou Chkaya, the then President of the Popular Union of Occitania, on 6 November 2016, as he told it. With the ascension of a new primate, it is expected that new texts would be unveiled, but, as of now, any official source has confirmed nor denied it.

In any case, a primacy of honour is and would be reserved for the first text given to the Occitan President, in his time. That's why the Violet calendar starts its annual countdown from this date. In official documents, either the Violet year (in Roman numerals, forcefully) replaces the Gregorian year, or it is added after it.

Devotees prays violet God in any moments they judges necessary (in case of doubt for advice or to ask a favor). Violets are respected while daisies are sacrificed at religious holidays. Violets can do miracles. If that happens, the violet becomes by his first name a saint.

Violet sweets should be consumed for a proper conversion.

Masses are held on Sundays. They begin with a prayer for the world. There Next is a reading of the Violet Odyssey. They end with a personal prayer.

Under the pontificate of Hyacinth, four Masses were held (one regular mass on March 28, 2021, one funeral Mass on June 5, 2021, one canonization Mass on November 6, 2021 (on the Revelation Day), and one last Mass, organised in order to pray and call God, in order to invocate the end of the Violettism (on February 27, 2021).

a. Canonized by Babou Chkaya

b. Canonized by Juan

IV. Adherents by countries and nations