The Gendarmerie of Vilthia, officially Corps of Gendarmerie, is the gendarmerie, or police and security force, of the Decracy of Vilthia and the extraterritorial possessions of the Central Protectorate.

The corps is responsible for security, public order, traffic control, criminal investigation, and other general police duties in Vilthia. Since 2012 an operations and control room coordinates the response of the Vilthian security services in the case of an emergency.

The Gendarmerie has been established on August 1, 2007 by King Tiziano I (Lodovico Della Vedova).

The Headquarters of the Gendarmerie, until September 2011, were located in Vignetia, in a little building in the southern part of the city. Then has been moved to the barracks of Piòn, near the Ossario Palace. 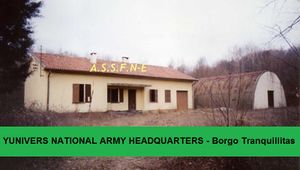 The new Headquarters in 2008, before the renovation of the building

The old headquarters in Vignetia continue to operate as a station.

Stations of the Gendarmerie

The gendarmerie has jurisdiction over these territories: