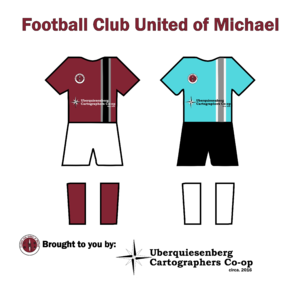 The club was founded on the 25th February 2021 by Newton von Uberquie as the third team founded to compete in the EssexiAir Premier League, in the summer of 2021.

F.C. United of Michael currently has signed Newton and Matthew, both new to playing for Essexia. However, Matthew was in the staff of the first Essexia FC game in 2019.

The club employs its manager, but has not made public any plans for further employment.

Since the team's founding on the 25th February 2021, the team has been sponsored by Uberquiesenberg Cartographers Co-Op.

As of 25th February 2021, F.C. United of Michael hasn't achieved any honours.