A presidential election to determine the 6th President of the Ashukov Federation took place on June 18th, 2017, where National Liberty candidate Jacob Huff defeated Conservative Manolis Afentoulis. These were the first elections since 2014 and since the Federation's restoration, as well as the sixth elections overall.

Incumbent President Edward Jacobs of the Orthodox Party was eligible for a rerun, however he has stated he did not intend to run for a second consecutive term and his third in total. His party's candidate was instead Jacob Huff, who has previously served as the 4th president, and who ran against Manolis Afentoulis of the Conservative Party.

As outlined in the Constitution of the Ashukov Federation, a candidate must meet various criteria, and must not be placed under incapacity by it from holding the office of president. In detail, a candidate must be at least eighteen years of age, a citizen of Ashukovo for over a year, and must have a high profile within the Federation. Any Ashukov citizen, regardless of the office they may or may not hold, can nominate themselves, however candidates are usually nominated by political parties or coalitions thereof. Additionally, according to the XIV. Amendment, the term during which a President serves has been raised to 6 months.

The current President is Edward Jacobs, self appointed on 29 January after a long period of inactivity within the nation. This was his second term in the Office. Even though the Constitution doesn't restrict him from running for a third term, he has stated he will not do so.

These elections will be the first in which the citizens will vote for their President, as opposed to the previous system during which the President was elected by the Federal Assembly.

The period during which candidates can register for election began on May 19. The first person to do so was Manolis Afentoulis of the Conservative Party. The National Liberty Party nominated former President Jacob Huff a day later. On May 25 Rilgar Ompastre was announced to be Afentoulis' running mate. 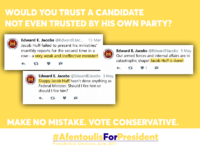 The Conservatives began their campaign a couple of days after Afentoulis' candidacy was announced on May 19. It was initially titled #AfentoulisForPresident in the form of a Twitter hashtag, however after Rilgar Ompastre was confirmed to run for the Vice-Presidency, the campaign was renamed to Afentoulis Garside J17 and used Let's keep Ashukovo working! as the campaign motto. No primaries were held and Afentoulis was automatically qualified to run for the President's Office as the Party's leader.

The campaign focuses around Afentoulis' personal achievements while active in several offices during Jacobs' Presidency, namely that of the Vice-President, the Ministry of Foreign Affairs, and the Ministry of Culture. Part of the campaign is also outlining the basic policies that Afentoulis will seek to implement upon election. Those policies are:[1] 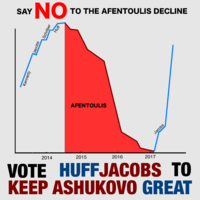 The 2017 presidential campaign of Ashukov politician Jacob Huff was launched on May 19, 2017. Huff became the Orthodox Party candidate, after being endorsed by of all its members, including incumbent President of Ashukovo and leader of the party Edward Jacobs. The campaign was organized and run in a collective effort by all members of the party.

On May 25, 2017 Jacob Huff layed out some of his planned policies, including incorporation of Latin culture, creation of a Ministry for Science and further advancement of Ashukov interests in the micronational community.[2]

On May 26, 2017, incumbent President Edward Jacobs was announced as Huff's presidential running mate.

On June 3, 2017 the Orthodox Party was dissolved. Jacob Huff and Edward Jacobs registered as candidates from the National Liberty Party and released its official platform.[3]

The election timeline was announced by the President's Office on May 19:

1 At the time of the polling called "Orthodox ".

The poll conducted by abc's abStat polling firm was the second in Ashukov history. The public was only asked a simple question, that of which candidate they support, with both candidates receiving the same amount of support. 11% of the respondents said they remained undecided.

At the time of the polling the candidates had not announced any running mates.

The poll was published on Ašukovski Vesti on May 22.

1 Not including "How would you rate President Jacobs' term?" and "Which District are you from?"


A second polling was conducted by the independent firm Famaspoll on May 27, within the time span of 5 hours and with the response of almost all citizens. The poll was dubbed Great Opinion Poll June 2017 and included more questions than abStat's. In all the questions asked in regards to the election, the candidates, and the parties the respondents were in favour of the Conservative candidates. The poll also revealed President Jacobs' approval ratings to be at 55%.

The poll was seen with skepticism by the National Liberty Party, with members considering the poll fixed and presidential candudate Huff calling it "fake news".

1Not including "What is the top issue you want your next President to focus on?"

The third opinion poll for the June 2017 election was conducted by Ashukovo's newspaper, the Vesti, over the course of three days (June 3–6) and independently from abStat (despite both being owned by abc). This poll was the first in which respondents saw Huff's campaign more favorably, with 55% of them saying they support Huff. Out of the 36% who had read only one of the candidates' programs, all of them admitted having only read Huff's, while the majority (46%) had not read any of the platforms. 46% also answered that Huff's campaign had been the most convincing thus far.

The poll was critisized by Afentoulis, who said on Twitter: "Vesti poll made in order to show a very very specific result. Is this the state news agency we want? Very sad!". In response, President Jacobs twitted: "Mr. Meltdown aka Afentoulis losing big in the polls. That's why he complains about the Vesti! No honor!". In another tweet he stated: "How do you call polls, where the respondents don't answer truthfully? Fake polls! A totally biased scam!", referring to the respondents who said they had read both programs despite Afentoulis having not released his. In a public conversation between the two on June 7, Afentoulis replied to the accusation, saying: "[...]The Conservative platform is on the wiki page in bullet points, I just hadn't made a document out of it (referring to Huff's pdf platform) [...] I wrote the points there to remember them when I write the full thing." The platform was finally published moments later in Ashukovo's citizens Facebook group.

AbStat held a conclusive final poll on 10 and 11 June 2017 where the Condervative campaign seemed to take the lead once again, with National-Liberty, however, being considered the most likely to win.

The final week before the elections was a very heated one, with both sides issuing propaganda material and accusing each other of defamation, intentional spreading of false information and personal attacks on both Twitter and Facebook. That period was also marked by Hasan Çakar's destruction of citizenship by the newly appointed Supreme Court, following a court process with the Vice-President which concluded that Çakar's citizenship application had been illegally accepted as its acceptance process went against the common convention. The Conservative Party heavily criticized the outcome and doubted the objectiveness of the judges. Following a series of disrespectful comments made by Çakar, President Jacobs called Çakar a "bullet-headed goblin" and a "dictator for life", something which eventually triggered Hasanistan's cutting of diplomatic relations.