The Principality of Aikavia (until 5 December 2014 Aikavian Federation) is an Imperial state of the Tsardom of Ashukovo bordering Slovakia to the southeast, and The Kingdom of Srnska the the north. and the People's Republic of Skarajevo in the west

It has a population of two and negotiations about entering the Tsardom of Ashukovo on the 3rd December 2014, It joined Ashukovo on 20 December

At the foundation of the Aikavian Federation, the President Pravoslav Kosnickij was looking for a well-sounding name. There were three names which the President was choosing from :

It was quite difficult so he put each name into the Hebrew alphabet and as with the Hebrew letters each of them is also a number so the first, third and last letters of the names were added up , divided by three and approximated.

Thus the result were the lettters Ayin, Kaf and Yodh. They put together, hence the name Aikavia.

The preparations to create the Aikavian Federation began directly after the Breakup of Narentia, however it was not until 10 September that Aikavia officially declared independence. In November 2014 Aikavia got engaged in a border conflict with the neighbouring Republic of Srnska. There were no battles , but the opposing forces occupied each others claims. Even though no peace treaty has been signed, the nations agreed that the river Nitra would form the new borders.

In spring 2015 Ashukovo dismemberred, and already in May 2015 Aikavia was effectively inactive. On 06.10. 2016 The legal continuity dispute was resolved, and Slavomir accepted Pravoslav as the new leader of the nation, while stating that will become effectively passive.

The head of the state is the Prince, currently Slavomir Papradovič I. the official title is:His Highness Slavomir Marek Papradović, Prince of Aikavia , Count of Dvor,Gorice, Lasavia,Nivna Luka , and Podgoria, Protector of Kosnik,Rockall and St. Nicolas. The office of the President has not been abolished, so Pravoslav Kosnickij continues to act as the President. The official languages are English, Slovak and Russian. French, German and Serbian are to be recognized as co-official. The regional varieties of Kosnikan and Izbjak languages maybe also used, but translation to one of the official languages is required.The Executive power is to be conducted by The Government of His Highness, appointed by the Prince.The Legislative power is held by the Council of Aikavia.The Judiciary power is held by the Court of Aikavia.

There is one Court of Aikavia set up by the Declaration of Itoria, but no judges.Five laws have been passed so far, one of them got novelized. The legal system is thought to be based on civil law . All laws are published in two languages- Slovak and English. Aikavia controls Kosnik Okrug,has considerable control over parts of Lukavenska oblast and Dvor uyezd and a remaining 5 Slovak citizens are influenced by Aikavian laws.

Despite long inactivity, the Principality has legally never been abolished.However, as Ashukovo dismemberred, the Aikavian citizens stopped being active in micronational politics, and it is assumed that Fadi I. abolished all his ties with the nation, while Pravoslav Kosnickij became a citizen of Eodus. It is unknown whether Slavomir assumes that the Principality continues to exist.

Aikavia was not a subject of international law on its own due to being part of Ashukov monarchy. The relations with the central government were quite friendly due to common culture.

However now Aikavia is a principality on its own, which seeks to become part of a federal micronation

There is no standing army, only the office of the Captain-general , currently Prince Slavomir Marek I. Papradovič. The country was involved in the border conflict with the neighbouring Republic of Srnska (known as the Nivna luka conflict). According to the Prime minister Aikavia can rely on three types of defense forces

There are two armouries in Aikavia: 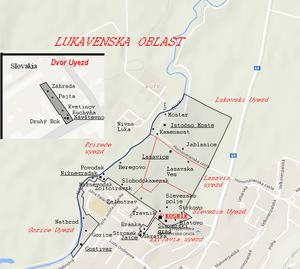 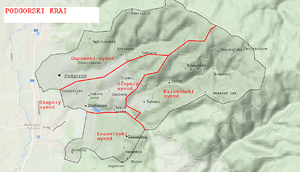 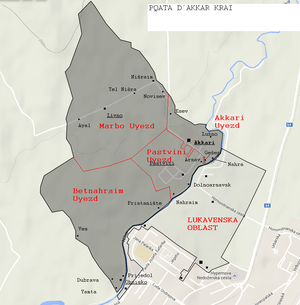 Aikavia is composed of three exclaves: Central Aikavia, Podgoria and Dvor. Central Aikavia consists of Lukavenska Oblast and Pqata d´Akkare Krai. It borders Srnska to the north, and Slovakia on all other sides. The landscape of Central Aikavia is dominated by fields. It has an area of 1.9 km squared and its borders are 8.37 kilometers long. The largest urban regions are: Akkari (16 houses), Pastvini and in the Nivna Luka Uyezd (some 3 houses and a gardenning center) and in the vicinity of Kosnik. The Kosnik metropolitan area is composed of a block of flats, having an estimated popualtion of 294.Kosnik is composed of only one appartment.Also in Gorice uyezd in the south there is a playground and a pub. It is around 275 meters about sea level, mostly flat. The highest pint is 300 meters above sea level and is on the northern borders with Skarajevo.

Podgoria , on the otherhand is very different.It has an area of 14.6 km squared and a border length of 19.3 kilometres The western parts are open plains, the eastern are wooded hills. There is one farm, a few cottages. Podgoria has suitable terrain for military practices. The highest point is over 740 m above sea level. Its lowest point is onbly 300 meters above sea level, however.

Dvor uyezd is completely surrounded by the municiaplity of Nitrianske Pravno. It is composed of one house, a garden and an old wooden store. Its borders are only 208 meters long, and the total area is 0,133 hectares. It has an altitude of around 345 m above sea level.

The area lies in the north temperate zone and has a continental climate with four distinct seasons. It is characterized by a significant variation between hot summers and cold, snowy winters.

There are a few fruit trees in the Dvor uyezd...

The law says there are three sources:

The country has been inspired by Slavic culture. There are two conlangs : Izbiak and Kosnikan. Izbiak is written in Latin script and is practicall the Slovak dialect without letters such as y,ä. Kosnikan is written in cyrillic and is also basically Slovak, but with the rule read as you write, while Izbiak is write as you read.