The Conservative Party of Ashukovo (Ashukov: Консэрвативски Странка Ашукова, Greek: Συντηρητικό Κόμμα του Ασουκόβο, Szredian: Konservatît Kanterban Aszukovian), domestically known as the Conservatives, is a national conservative party in Ashukovo. It is the legal successor of the Social Patriotic Party, after the declaration of the second Ashukov Federation on January 29, 2017, and through its SDP and SPP legacy, the Conservative Party is the second oldest party in the federation. It is nowadays considered a main political power in Ashukov politics, holding one seat in the Federal Assembly and the majority of seats in the Council of Ministers.

The party is headed by Manolis Afentoulis, former Tsar of the Ashukov Tsardom, Supreme Judge, Chairman of the Ashukov Central Bank and current Vice President and Minister of Culture and Foreign Affairs.

The party traces it's roots back to the Social Patriotic Party, which was founded in Hagiopolis on December 22, 2013, under the name Social-Democratic Party of Ashukovo and was approved by the Ashukov Government a day later.

The party split from the Orthodox Party following the admission of Mouzilo into the Federation. The two former OP members who split, Afentoulis and Ompastre, joined a former member of the National Party, Sigmund Schmidt, and formed the SDP, a party with a mixture of ideologies, mostly those of social democracy, social patriotism and Ashukov nationalism. Soon after the foundation, the SDP affiliated itself with the Orthodox Party.

The party flag of SPP

The party gradually leaned more towards the right wing, and after Schmidt's departure, who was the main representative of social democracy in the party, the SDP renamed itself to the Social Patriotic Party, gave up social democracy and adopted national, and social conservatism, with Schmidt continuing the legacy of the original SDP in his home state of Carpathia, now as a fully social democratic party. It was then clear that SPP was a right wing party, though some had even went as far as to label the party as far-right. The SPP withdrew its affiliation with the Orthodox Party when the latter joined the National Party to create the United Ashukovo coalition. SPP then became the main opposition party to the Orthodox-led government.

With the adoption of the absolute monarchy as the new type of government, the party was disestablished, as did the rest of the Ashukov political formations. The party was inactive throughout the monarchical period, but when Ashukovo went back to the former system of federal democracy, the party's core, even though weakened by the long period of inactivity, went on to establish the current Conservative Party. The Conservatives largely kept the ideology of the SPP, while adding political ideas they felt should be part of the goals for the newly reformed Ashukov Federation.

In January 2017, the Party briefly ruled over the short-lived single party State of Ashukovo.

With the reformation of Ashukovo to a republic, the party remained a significant player in Ashukov politics. It currently holds the Ministry of Culture. The party also adopted the flag of the defunct Ashukov Federation as its official flag.

As of 2020, the ideology of the Conservative Party is composed of several right-wing ideologies, with the most notable being that of social conservatism. In addition, the party believes in the values of Ashukov nationalism, national conservatism and traditionalism, such as the need to preserve the national identity of Ashukovo, its values, Orthodox Christianity as the official religion of the state, and the belief that Ashukovo is indeed a micronational power. The Conservatives also believe in civic nationalism, in the sense that people of various ethnic backgrounds can adopt Ashukov values and ethics and uphold their Ashukov national identity, while holding the idea that Ashukovo is a civic nationalist state with people of Hellenic, Slavic and American ancestry, to name a few, have been proven to be the most patriotic.

The Conservative Party firmly believes in the independence of the Ashukov nation and has previously opposed the absorption of Ashukovo by the Holy Roman Empire, as was intended in mid-2017.

In social matters, the Conservatives are against same-sex marriage, abortion, euthanasia, gender self-identification, and sex change.

The party also believes that Christianity does and should play a role in Ashukov politics as well as day to day life, without, however, discriminating against people of other beliefs. The Conservatives have shown their full support in the freedom of religion and its insurance by the Constitution.

Out of the current and former Ashukov parties, the Conservatives have been the most staunch supporters for the usage of the Ashukov language, believing it to be an integral part of Ashukov identity.

Logo of the Conservative Party of Mouzilo

The Conservatives currently have official representation in two out of the three states of Ashukovo, Akebar and Mouzilo.

The return of Akebar in the Federation marked the restoration of the local Conservative branch. Akebar's governor, Rilgar Ompastre, is the current Secretary of the Party. The other locally affiliated party is the Conservative Party of Mouzilo, a successor to the oldest party in the state, the National Party.

In the CP, as organs are considered several purpose-specific groups operating within the party. These organs have a range of purposes, such as organisation, education and communication. Currently, the Party's organs are five: 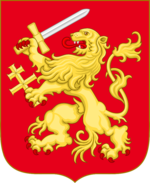 Coat of arms of the Patriots' Society of Ashukovo

The Patriots' Society of Ashukovo (PSA) is a closed society restricted to the members of the CPA. Its interests are mainly educational, cultural and political, and its role is educating and motivating its members. It also seeks to instill them the Ashukov national pride, the ideas of the Conservative Party and to create a citizen's conscience. It was initially conceived on June 13, 2017 and was accepted as a party organ a day later.

Unlike the party itself, the PSA does not accept foreign nationals as observer members. Membership is also voluntary and no party member is forced to join, however the party advises its members to do so.

The motto of the PSA is "In defence".

The party has been known for its use of campaigning, more than any other party, even since the SDP times. Some posters follow as an example: