The Sede Vacante, in the Decracy of Vilthia, is the period of vacancy of the Office of Regency of the Central Protectorate and thus of the nation. It is Latin for "the seat being vacant" (the ablative absolute of sedes vacans "vacant seat", and/or the Italian for the same term), the seat in question is the one of the King.

Inception of the Sede Vacante

The Sede Vacante begins in the precise moment a Sovereign dies or resigns. From this moment, the Regency Office of the Central Protectorate (the institution that holds the sovereignty over the Vilthian Territory) and the Decracy of Vilthia are ruled by the College of the Noble Families, represented and supported by the Camerlengo. The Sede Vacante is proclaimed by the Camerlengo of the Central Protectorate, and confirmed by the college.

During the Sede Vacante 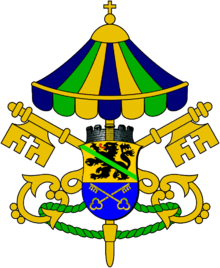 Seal of the Decracy of Vilthia during Sede Vacante. The keys, symbol of the Sovereign's executive power, are turned upwards: it symbolizes the absence of government on the lands of Vilthia

During the Sede Vacante the nation is ruled by the College of the Nobles, a council composed by the heads of every noble family.
The college can only carry out issues of ordinary administration, having to leave every political decision to the Sovereign who will be elected.
The main function of the college is the organization of the Conclave for the election of the new Sovereign. The representation of the nation, as well as the management of Central Protectorate's ordinary administration, belongs to the Camerlengo.
During the Sede Vacante all the positions and offices of the Nation and of the Council of the Nobles as well decay temporarily. The Nobles will take the title of Noble DPA (Donec Probatur Aliter, Until Proven Otherwise). They must be confirmed by the new Sovereign, after an oath of allegiance. De facto the Sovereign could not confirm them, but this has never happened. In the period of Sede Vacante there are the following limitations:

The Camerlengo has jurisdiction only on the routine administration and on preparations for the conclave. For all other issues, will have to refer to the College of Nobles. His role ends with the election of a new king.

Conclave and election of the new Sovereign

The Nobles will meet in the Conclave, a special meeting of the College of the Nobles, to elect, choosing between one of the Heads of the 5 Great Houses, the new Sovereign. The Conclave takes place in the Chamber of the Boats, in the Central Protectorate Palace. The Nobles are closed inside the Chamber, and they cannot exit until a new Sovereign is elected. The new Sovereign will appoint the new Great Vicar and will choose a new Camerlengo.