Kasey Honings is a politician from Hartford. His political career dates back to the predecessors of New Europe and the New European government itself. After inactivity throughout portions of New Europe's history, Honings resurfaced in 2015 to reestablish himself in the North American Confederation.

Founder of the Connecticut Republic 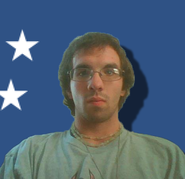 Kasey Honings was an original founder of New Europe. Early in his involvement with New Europe, Honings supported the policies of ethnic cleansing and white supremacy, eventually, however, opposing it. After a relationship with an African-American woman, the Emperor of New Europe removed Honings from authority and began to dismantle Connecticut.

In later years, however, both the Emperor and New Europe as a whole would have a change of heart concerning white supremacy, and it was eventually declared illegal by the Emperor. The modern North American Confederation, in which Honings is the Deputy Prime Minister, has no aspects of white supremacy within its government, and the laws against it presumably remain.

On 8 June 2015, Emperor William II and Prime Minister Marx announced the appointment of Honings to the office of Deputy Prime Minister of the North American Confederation.