A general election was held in the Essian Commonwealth in June 2017 to elect the Heaminister and all ten seats in the Parlamenzalochas, convoked by royal decree in response to population growth in the Commonwealth since the original appointment of James Reginald Frisch in March 2017.

The election was branded as a massive success for the Green Party of Esse, who won a majority over the Democrats and saw James Frisch reelected. It is the first election to take place since the decree of the Codes a Clementine, which officially defines the delegated powers of the Parlamenzalochas under HIllM Lord Henry.

The appointment of James Reginald Frisch as the inaugural Heaminister took place March 20, with intentions to see him to a six-month term before elections would be held. Lord Henry decided, however, that it would be a beneficial idea to run a sort of "midterm election" in May to gauge the opinion of the ever-changing populace. The elections were scheduled for 22 May, however after a petition to provide more time for manifestos and policy positions to be released, the elections were pushed back until 8 June.

Major policy positions revolved around the Beiwingian autonomy debate that was aggressively fueled since the initial court hearing on the issue in mid-March. The Federalie Partite a Essia was founded - and in turn campaigned for - more power for local governments, in a large part due to the Beiwingian question. The party also insists on Constitutional amendment to strip the courts of the power to create new political subdivisions.

Due to this policy position, Heaminister Frisch - who at the time was also Warden of the County of Beiwing - caucused with the Federalists when running to maintain power as head of government. Criticism of the Federalists, under the leadership of Horatio Eden, has risen as opponents, particularly from A Couna, suggest that Eden has allowed the Beiwing question to be blown out of proportion through perceived "failures to hold a follow-up hearing."[1]

As the Federalist Party grew inactive and the Lennonists lost their support base, a cross-partisan agreement was made in June 2017 to form two new parties - including dissolving A Couna - and to once again push elections backwards, this time until 22 June. A decree was made by Lord Henry making this a reality, and the agreement gave birth to the Green Party of Esse and the Democrats. The Greens, led by Heaminister Frisch, quickly gained ground and, with an insanely successful recruiting drive, found themselves as the largest political party in Essian history within a week of the party's establishment.

The Green Party released a manifesto in the week leading up to the election and it was well received, further boosting the party's opinion poll numbers as it became evident that the party was now the dominant party in the Commonwealth. Lord Henry contacted the Greens and began discussing scenarios following the election, including suggesting that the party could potentially establish a majority government.

Voting stations were opened behind schedule, around mid-day on 22 June, and remained open for ten hours. Turnout was at an all-time low - only barely breaching 50 percent - and the Greens had won a 55 percent majority.

Despite the clear victory, the margin of victory was significantly less in actuality than it had been in any opinion polls since the initial poll following the creation of the new party system. The abnormal scenario was attributed to two variables: first, low voter turnout from the Greens; secondly, independent voters casting votes for the two parties, an actuality that was unlike that in the opinion polls.

The 2017 Essian premieral election was held on 22 June 2017 to elect the Heaminister of the Essian Commonwealth. Incumbent Heaminister James Reginald Frisch, who had served since his appointment as the inaugural officeholder in March 2017, was eligible to seek reelection and won with twice as many votes as his challenger, Alexander Gibbs of the Democrats.

This election was the first of its kind, and was the first election for an Essian head of government since the 2015 elections for Lord Protector. Frisch won the election and assembled a majority government which took office on 25 June 2017.

The Heaminister elections were not nearly as publicized as the general election, however the few opinion polls made during the campaign season showed Frisch as highly popular, performing with higher percentages than his own party. Frisch's election was not only endorsed heavily by notable Essian politicians from both parties, but was practically endorsed in advance by HIllM Lord Henry himself.

Alexander Gibbs, a member of the Democrats, ran a brief campaign after Stephen Freayth dropped out and endorsed Frisch. Unlike the Greens, Gibbs and his party released no manifesto, a state which was considered more or less the primary reason why the Democrats lost. The absence of Gibbs for much of the campaign season made many citizens feel as though he was "out of touch" with the population. 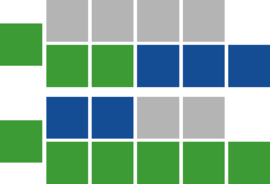 Parliassam composition before (upper) and after (lower) the June 2017 election.

While talks between the Essian Monarchy and the Green Party of Esse had been underway for at least one week prior to the elections, it was not until the results were released that the parties came to a consensus for the next government. Heaminister-elect James Reginald Frisch released a statement where he would "ask the Monarch to allow me to form a Cabinet that reflects what our nation has shown it wants." The Monarch, Lord Henry, confirmed that he would be appointing Frisch to a second term as Heaminister later that evening.

I want to begin by congratulating my colleagues in the Greens for our excellent campaign, and giving commiserations to those in the Democrats. I implore the Monarch to stick to his plan and make his appointments with the results of the elections in mind, as we have today shown that the democratic process can succeed in Esse, and under our legislative plans, we will maximise democracy. I will shortly ask the Monarch to allow me to form a Cabinet that reflects what our nation has shown it wants.

The results of talks between the Monarchy and the Greens was the Second Frisch Term, the formation of a Green majority government, and the endorsement of the plan from the Monarchy. The Term took office at 16:20 Réma time on 25 June 2017, at which time the Monarch called for the Democratic opposition to elect its leader and to, if they pleased, form a Shadow Cabinet. About an hour before the second term took office, Frisch reiterated intentions to solve the Beiwing autonomy crisis, a subject of great criticism of his previous administration.