From MicroWiki, the free micronational encyclopædia
(Redirected from Grand Duchy of St.Clemens)
Jump to navigation Jump to search

St. Clemens, officially the Grand Duchy of St. Clemens or Saint Clemens (Spanish:Gran Ducado de Clements Santo Portuguese:Grão-Ducado de São Clemente), was a self-declared independent state internationally recognized as a micronation. With claims in North America, it was governed by a monarchy and a bicameral parliament. Its capital city was "Memphis", named after the ancient Egyptian city of the same name.

St. Clemens was a state ruled as a grand duchy with the Monarch, HRH Grand Duke Henry I, acting as head of state. The head of government was the First Minister, who presided over a cabinet and regulated all meetings in the House of Commons. The presiding officer over the Royal Senate was the Senatorial President.

The name Saint Clemens is a merger of the words Saint and Clemens, evidently named after the nation's royal house, the House of Clemens. The house name comes from the name of the nation's co-founder, Henry Clemens-Twain. 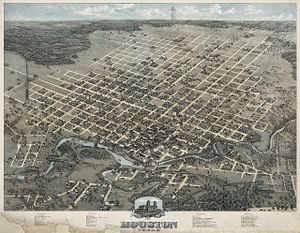 Houston before the Industrial Era, circa 1873

By the 21st Century, Houston had developed into a massive greater metropolitan area despite much criticism from those of the green political sphere, who even today condemn the use of oil as a major industry. The city faced many problems with urbanization, such as high crime rates and surging poverty, which did not see improvement from the efforts of mayor Annise Parker. With what was described as "failures on the part of incumbent government to maintain unalienable rights for the people," come August 2014, the Federated States—a micronation based in the city—rose to prominence, and it remained in existence for two years until its peaceful dissolution in Mid-2016.

St. Clemens declared its independence in May 2016 shortly before the ratification of the Constitution and during a period with several provisional governments. The nation, led by the former President of the Federated States, was seen as a continuation of the goals of the Federated States in a better organized government system. The nation began opening relations with other nations in the following month, and Carl Jr—the inaugural First Minister—appointed the First Jr Government the next day.[1] On the 4th of July Session of Parliament, the House of Commons approved a flag referendum which would take place between July 10 and July 16, 2016. On July 13, the second round polls closed with an announcement from Henry I that a new flag had been chosen for the nation.[2]

On July 13, the House of Commons approved the creation of a second chamber of Parliament by the necessary three-fifths majority. The Royal Senate of St. Clemens was created shortly after.

Only days after the establishment of the Royal Senate, the Grand Duke launched a self-coup, ceding all land away and dissolving the nation's government.

Duchies are the most independent of the non-commonwealth eligible states governed to some degree by Saint Clemens. Upon the Duchies ratification of the St.Clementian Constitution of 2016, the Monarch will appoint a noble to serve as the Duke of the new Duchy. Until the new Duke has been confirmed by a majority in one of the chambers of Parliament, the Grand Duke serves as the head of the Duchy.

A duchy is reserved the right to govern itself as necessary when the Parliament has the inability to act in said capacity, and the Grand Duke may remove the Duke of the Duchy at any point in favor of a new candidate. The removal may be done without approval of Parliament, however may also be done through the advice of the First Minister.

There are currently four duchies in St. Clemens. Vespucciland, which is the southern half of an area divided between St. Clemens and the Realms of Valdsland. Abbey, regarded as the direct successor of the FSA state of Cambridge and named after the music album of the same name. Quetico, the direct successor to the Grand Duchies former incarnation and the only claim which is not in the United States, being in Canada. And lastly Alonia, the final remaining half of the Grand Duchies original government, Hiddleston and Alonia.

Cities are, in a formal sense, the smallest level of autonomy, most always being inside a duchy or dependency. The one exception to such a rule is the capital City of Memphis, which is secondary autonomy, submitting most all of its authority to the Grand Duke. Cities may be formed unofficially, however will not be granted rule of law until they have been recognized by the Grand Duke and Parliament.

Cities submit nearly all of their authority to the body directly above them in the chain of sovereignty. In the case of Memphis that is the Grand Duke, whereas in the case of Voyageurs would be the Duchy of Quetico. The primary duty of a city is to collect the wishes of their small area of the populace and use such data to report to higher bodies.

There is currently one recognized city in St. Clemens, Memphis, and one currently going through approval.

Dependencies are all different in nature, and are established on a case-by-case basis established by the Parliament or the Grand Duke. For example, the Commonwealth of Esse was originally absorbed into St. Clemens after it had already been a Commonwealth for nearly an entire year, first independently and then under the Atlantic Commonwealth. On the other hand, if a nearby Principality were to be admitted into St. Clemens, it would likely be admitted as a dependency under a principality.

There is currently one dependency in the Grand Duchy of St. Clemens, that being the Commonwealth of Esse. Esse is the oldest political body in the Grand Duchy, having been established in June 2015 nearly an entire year before the rest of the bodies.

Legally speaking, Military Districts in St.Clemens are not territorial possessions of St. Clemens. Rather, they are nearby micronational possessions which are, in practice, are protected by St.Clemens. These districts are usually linked to the Monarchy of St. Clemens in some manner. For example, Valdslandic Vespucciland is a possession of the Realms of Valdsland, however its head of state, the Margrave, is HRH Henry I, Grand Duke of St. Clemens.

Because Military Districts are legal possessions of a variety of other micronations, it cannot be said for certain what the powers of said possessions are. However, it is common for the Districts to have a respectable level of law-making capability in their own micronations.

There are currently two Military Districts protected by the Grand Duchy of St. Clemens. The first, and oldest, is Vespucciland. More commonly referred to as Valdslandic Vespucciland to avoid confusion with the Duchy of Vespucciland, the Realm was officially ceded to Valdsland shortly after Valdsland's declaration of existence and literal secession from the Federal Republic of Whestcorea.

The Second Military District is the Principality of Valites, which is a Principality in the State of Koss. Ruled by Henry I as Prince Henry, Valites was ceded to Koss on July 12, 2016, upon the agreement between Kossians Henry I and Lucas Campos, Anax of Koss. The region has made relations between St.Clemens and Koss much more cordial than before the agreement.