From MicroWiki, the free micronational encyclopædia
(Redirected from Prince Charles I)
Jump to navigation Jump to search

Prince Charles, Viceroy of Raphania, Duke of Occidentia, otherwise referred to as Sir Charles of Raphania (known formerly as Shah Alexander I and Charles von Graustark) (b. 30 January 2003) is a Westarctican-Raphanian micronationalist who currently serves as Director-General of Austenasian Television Productions, Viceroy of the Colony of Raphania and Foreign Minister of the Grand Duchy of Westarctica.

Throughout his micronational career (spanning as far back as 2007), Charles has served in numerous positions within the community and gained a small amount of attention through his leading role in establishing several micronational-themed media platforms, including Television Territory, Phokland News Network, Television Graustark and his most notable platform, MicroRamble.

Charles began his micronational career in 2007 when he created/ran the Kingdom of Rosston in the playground of his primary school until its dissolution in 2013. During his time running Rosston, Chalres was for the most part unaware of what micronationalism was and simply saw himself leading a "new country". This juvenile belief later faded away and while searching for a more accurate description of the hobby he was participating in, he found the YouTube page of the now-defunct Kingdom of Bahoudii, more specifically, a micronational newscast from them, dated 15 January 2011. From this he discovered the term "micronation" and through this keyword, eventually found MicroWiki; a site he would lurk on until eventually creating an account in 2018.

Years after Rosston became inactive, Charles' intrest in micronationalism was reignited after watching actor-comedian Doug Walker's 2010 film Kickassia where the micronational Republic of Molossia and its leader Kevin Baugh were featured prominently.

Following the restoration of Rosston (now renamed Phokland) in 2017, Charles was selected as Prime Minister of the new country. From there he became the monarch of the Principality of Phokland, a position that later evolved into Viceroy for the Viceroyalty of Phokland then to Tsar of the Tsardom of Phokland and finally State President of the Phoklandian Free State. His involvement in Phokland ended in April 2020 with the dissolution of Phokland as a micronation.

While a part of Phokland, Charles began associating with other micronations, notably the Empire of Austenasia where he became the nation's Official Historian, Council to Arizona and, Commissioner of the Austenasian Crown Dependency of Bregusland. Over time, however, he began drifting away from Austenasia and began to focus more on his primary project, that being Phokland and later, Dracul. His involvement in the empire came to an end in December 2020, when after a legal battle in Dracul, Ross was forced to resign from all government offices within Austenasia. His last position (Commissioner of Bregusland) came to an end on 1 January 2021 when Bregusland dissolved. Despite his departure, Charles still retained all noble titles and awards bestowed upon him during his tenure in Austenasia, and additionally, still maintained his Austenasian citizenship. He would later return to Austenasian involvement in June 2021, this time in the private sector as he was appointed Director-General of the privately owned, government subsidized Austenasian Television Productions.

Charles continued with Phokland until early 2020 when a split in the government caused the nation to dissolve, leaving Charles stateless. Shortly after Phokland's dissolution, he was approached by Vice President of the Commonwealth of Dracul, Stephen Luke with the proposition of him becoming the new Lieutenant Governor of North Dracul (a position he held until December 2020 when he resigned after a spat with North Dracul's Governor Eric Williams). Ross accepted the offer and shortly thereafter assumed office on 22 April 2020. In his time as Lieutenant Governor, Ross helped to streamline the state's executive office and created North Dracul's first official website.

After taking office, Charles began dedicating the majority of his time to Dracul, subsequently taking the additional responsibilities of becoming the Commonwealth's de facto chief marketing adviser, the Dracul Army's head recruiter (and later Commanding Officer), Deputy Secretary of State, Draculian Ambassador to the Grand Republic of Cycoldia and the United States, as well as Secretary of the Interior. Through his numerous positions and heavy involvement in government affairs, Lord Charles cemented himself as a prominent Draculian politician and later adviser, with the latter being most visible through his relationship with the Vice President's Office.

After leaving the office of North Dracul's Lieutenant Governor, Charles dedicated the bulk of his attention to his role as Secretary of the Interior and during his time in office, worked to streamline the department and create cadet agencies, such as the Land Administration Agency. He later left this and all other Dracul positions in May 2021 choosing to take a break from micronationalism. This lasted roughly a month and in late June 2021, he returned, this time in the much more minor roles of assisting with the forming of a newly reorganized Bran District government, becoming Deputy Director of the privately owned Dracul Historical Society and by helping to oversee new Dracul territorial projects as a de-facto Colonial Administrator, in which capacity he became Administrator of Las Verdes Colinas Territory.

In September on 2021, Charles lost his Dracul citizenship following accusations of treason and the subsequent deceleration of war between Dracul and Graustark. These claims of treason were later proven to be false, but regardless Charles decided to ultimately leave the Commonwealth.

In February 2022, Charles would temporarily return to Dracul to assist in filling a vacant government position within the Draculian Department of Naturalization due to the previous officeholder quitting unexpectedly. This would end following the appointment of new individuals to these posts, ending Charles' time in the Dracul government.

In mid 2019, Charles created the micronation of Graustark based on the book of the same name. The country took great influence from the Kingdom of Ruritania and following its creation Charles was declared monarch. However, at the end of 2019, Graustark entered a long period of stagnation which persisted until 2021 when the nation was briefly revived. This jump of activity would be short lived as by that summer, with the establishment of Raphistan, Graustark-Dawsbergen would once again return to inactivity.

Wanting to give the nation a fresh start, in May 2022, Charles would abdicate the throne of Graustark-Dawasbergen, giving it to his friend and longtime micronationalist Cas, who would go on to reign as Queen Martha I.

Shortly after leaving Dracul, Charles purchased an acre of land in northeastern Arizona. This land was initially acquired for use in Graustark-Dawsbergen, but after inactivity restarted within the project, the property succeeded from the kingdom and reorganized itself as the Desert Realm of Raphistan with Charles assuming the title of Shah and the reigning name of "Alexander I". The name change was done mostly to disassociate the state with his past projects and to give von Graustark a "fresh start". Furthermore, a contributing factor in the name change was also Charles' entry into politics and state government employment macronationally. In April 2022, Charles would drop the "Alexander" persona and would change his title from the Shah of Raphistan to the Grand Emir of Raphania.

On 19 November 2022, following the Raphania-Westarctica War, Charles would abdicate as Grand Emir and following Raphania's annexation into Westarctica, become the territory's Viceroy, retaining the title "His Highness, Prince of Raphania".

After joining Westarctica, on 11 December 2022, Charles was appointed Foreign Minister of Westarctica. 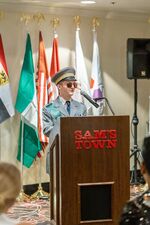 Throughout his micronational carrier, Charles has developed some small notoriety within the community; this mostly stemming from his work towards improving MicroWiki as a Wiki Administrator and more recently, his (unsuccessful) campaign of attempting to revitalize the wiki forums as a primary means of communication for several micronationalists. Additionally, he has gained attention for his media productions, such as the Bregusland Report, an Austenasian news program which he hosted and which was referenced in a Lonely Planet article on the 2020 COVID-19 Virus,[1] and MicroRamble, a podcast which he co-hosted along with other micronationalists. Ross has also received criticism over the years coming primarily from his criticisms regarding the GUM and for his botched administration within the OAM, the latter causing the eventual disbandment of said organisation, as well as his frequent criticism of modern micronational "degeneration". However, despite these critiques Charles has been able to stay on rather good terms with a majority of the community, particularly within the MicroWiki and Discord sectors, receiving an honorable mention in the MicroWiki's 25 Most Influential (2020) by Statistic-Dime. In August of 2022, Charles was invited to speak at MicroCon 2022 where he gave a presentation on how many micronations are inspired by historical entities/nationstates within the "real world". 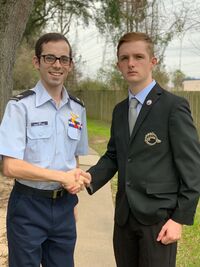 Charles receives the Order of the Silver Dragon from Vice President Stephen Luke in February, 2021.