His Grace, Jordan Farmer, commonly known as Duke Jordan of the Bear Peninsula, is a member of the micronational community most active within the Grand Duchy of Westarctica. He is also active as a noble in the community of the Empire of Agber. Since 11 February 2019, he has served as the Prime Minister of Westarctica.

Jordan was born in 1986. Due to his father being in the United States Army, Jordan moved around a number of times as a child before his family settled in Augsburg, Germany for a relatively stable six-year stint, beginning in 1991. In 1995, Jordan and a group of friends founded a micronation called the Kingdom of Kolios. Inside this project, he served in a number of roles, including Chancellor, Captain of the Guard, and Margrave of Sulli. Jordan left Kolios behind when his family moved to Arizona in 1997, eventually forgetting about the endeavor altogether. Kolios would eventually evolve into a portion of the Empire of Agber in 1998.

Jordan spent the majority of his teen years in southern Arizona, where he attended high school. Upon graduating, he attended Eastern Arizona College, majoring in music. However, after completing a year of study, he found himself feeling restless. Between the rigors of studying music taking much of the enjoyment out of the subject, and some issues in his personal life, he felt like he needed a new direction.

Jordan entered the U.S. Army in October 2005, being trained as a Biomedical Equipment Technician. During his technical training at Sheppard Air Force Base, Texas; he was the only Army personnel admitted into the Air Force Chaplain’s White Rope leadership program, and was eventually elevated to the position of Squadron Rope in recognition of his support and dedication to the program. During his career, he would also be stationed at the Presidio of Monterey, California; Camp Carroll, South Korea; Fort Knox, Kentucky; and Fort Campbell, Kentucky.

During this time, Jordan coordinated the U.S. federal giving initiative, the Combined Federal Campaign; became the training NCO for the hospital Color Guard; and worked with Club Beyond, a teen outreach program. While at Fort Campbell, he deployed to Afghanistan in support of Operation Enduring Freedom with the 101st Airborne Division. He was Honorably Discharged from active duty status as a Sergeant in January 2013.

In 2017, Jordan became a citizen of Westarctica. He was initially drawn to the nation because of its dual existence as a not for profit entity that had a real world mission of conservation. Later that year he was bestowed with the title Duke of the Bear Peninsula.

In February 2018, Jordan approached Grand Duke Travis about starting a Facebook page for Westarctica's citizens. His hope was that this group would help foster a greater sense of community among Westarcticans. As it turned out, the Grand Duke had created a group years earlier, but activity had slowed to a standstill. Grand Duke Travis handed control of the group over to Jordan. The group's membership swelled from only 12, to nearly 400 in just six months. He would serve in this role until December of that year, when it was added to the responsibilities of the newly elevated Minister of Communication.

Shortly after taking the reins of the Citizens of Westarctica group, Jordan offered to assist the Grand Duke with the backlog of immigration requests. Grand Duke Travis accepted, and decided to make Jordan the Minister of Citizenship & Immigration, adding him to the growing Royal Council.

Jordan officially relinquished his duties when elected to the post of Prime Minister.

Commissioner of the Civilian Corps

In March 2018, Jordan approached Grand Duke Travis with an idea to expand and diversify Westarctica's ability to recognize citizens for their contributions to the nation. The idea was to have a non-military organization that allowed citizens to earn military-style ribbons for acts they were already doing, while also incentivizing further activity within Westarctica. After correspondence back-and-forth, the Westarctica Civilian Corps was unveiled to the public on 1 April 2018.

On 13 July 2018, Jordan was given the additional title Marquis of Wilbanks in the Peerage of Westarctica in recognition of his achievements with the Civilian Corps. The title is named for Mount Wilbanks on the southern border of the Bear Peninsula.

Jordan officially relinquished his duties when elected to the post of Prime Minister, although he still assists his successor in the day to day duties of the role.

Jordan's candidacy for Prime Minister of Westarctica in the 2019 election was announced on 9 January of that year. Shortly thereafter, he unveiled his 12-point plan regarding his vision for the term, should he be elected. These were:

Jordan won the election with 32.7 percent of the votes. The margin for victory was narrow, with Jordan winning by only five votes.

As Prime Minister of Westarctica

Jordan assumed the role of Prime Minister on 11 February 2019. He was elected to a term of four years.

On 28 March 2019 Jordan unveiled a Pride flag for the Westarctican LGBTQIA community. He declared that the flag was a gift for all Westarcticans to utilize in their own pride celebrations.

On 13 April 2019, the First Constitutional Convention was established to draft and approve a governing document, that will establish Westarctica as a true constitutional monarchy. This document is intended to be more robust, and have the ability to guide Westarctica into future generations, when compared to the nation's previous documents. The convention was officially concluded on 30 August of the same year. The Constitution was ratified by the citizens in a vote held 7–9 February 2020, and was then signed into law, taking effect 15 February 2020.

Another significant function Jordan has performed during his time as Prime Minister is participation in various diplomatic exchanges. The first of these was to Molossia in April 2019. During this exchange, Jordan presented President Kevin Baugh with a bottle of his favorite prickly pear mead, and one of the newly minted challenge coins for his office. It was the first such visit in which Grand Duke Travis did not participate.

Later that year, he attended MicroCon 2019 in as part of the Westarctican delegation. The conference served as a coming out of sorts for the new Prime Minister, to the greater micronational community, and he began forming ties with a number of foreign representatives. During the main conference, Jordan gave a presentation on how to better connect with your citizens, from the viewpoint of the work he and the Grand Duke had done over the previous year-and-a-half. Throughout the weekend, he received special recognition from six different micronations.

Jordan played an active role in the discussion and development surrounding the revival of the Antarctic Micronational Union in early 2020.

While the majority of Jordan's work done in the greater micronational community is an extension of his role as a member of Westarctica's government, he has engaged in some work as a private person.

In January 2019, Jordan became a Canon in the short-lived Noble Chapter of the Grand Hunt. This was a fraternal organization aimed at non-denominational Christian fellowship. While initially promising, the Chapter and its adjacent Prince-Abbacy of Inselwald fell into a period of decreased activity, before that project was reimagined as the Kingdom of Argonne, which he was a member of until it was disbanded on 20 April 2020.

In April 2020, Jordan's mother discovered an old notepad from his childhood containing details that led to him reconnecting with the Kingdom of Kolios, now a Principality within the Empire of Agber. He is currently serving in an unofficial advisory role, although he was named their Chief Heraldist and Chief Chronicler by Empress Arlene. Her successor, Emperor Devon, has reaffirmed these positions, which continue to be advisory, not official government posts.

Jordan is also a founding board member for the Micronational Hall of Excellence, in addition to serving as its first Board Executive.

Jordan currently works in the healthcare technologies field, having spent the majority of his career in federal government service. On the side, he does consulting for Kickstarter campaigns and helping non-profit organizations handle trademarking processes. In 2016, he became an ordained minister.

In his spare time he enjoys hiking, volunteering, craft beer, and is an avid hockey fan. He is also has an interest in the history of both micronations and phaleristics (the study of orders, fraternities and award items), with a special focus in areas where the two overlap; he has a growing collection of items from this hobby.

Jordan is a member of several organizations, including the Orders and Medals Society of America, the Arizona-Sonora Desert Museum, Knights Veritas, and the Veterans of Foreign Wars.

Since 2015, he has been dating Jessica Barton, a fellow Westarctica citizen. In 2021, they adopted a dog together. They named the Labrador retriever-husky mix Tilly.

On 29 October 2019, Jordan experienced a series of strokes, due to a previously undiagnosed heart malformation and was hospitalized. After the stroke symptoms abated, it was discovered that he had entire right-side numbness and had severely diminished motor skill capacity on the same side. Jordan returned to full duty, having regained all function on 9 December 2019. Follow-up appointments will ascertain a long-term plan for the problem, but he is currently considered to be in no danger of further episodes.

Other honours and recognition

Shown, from left to right, are: 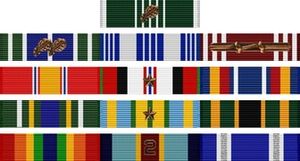 Shown, from left to right, are:

Other awards Jordan earned during his service include the Air Force's white aiguillette with a silver tip for service in the Chaplain's leadership program; the Combat Medic and Combat Action badges; and the Expert marksmanship badge with Carbine, Pistol, and Rifle qualification bars. While stationed at Fort Campbell, Jordan was part of two teams that won medals for the 2012 Week of the Eagles competitions, which pitted representatives from across the 101st Airborne Division against each other. He received a silver medal with the marksmanship team, and a bronze one for ultimate.