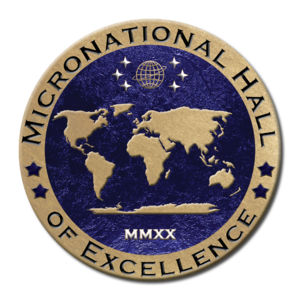 The Micronational Hall of Excellence is an institution created with the goal of preserving history and recognizing the contributions of significant individuals in the field of micronationalism. The current Board Executive is Jordan Farmer.

The Hall of Excellence was originally conceived in January 2020. A governing board was formed in March of that same year, followed shortly by the approval of both a Charter for the organization, and a set of bylaws for the Voting Body. While not a secret, the board's roster is not publicized information. Board members do not serve in a capacity officially tied to their role in a specific micronation, instead being chosen as micronationalists. Members are involved at various levels in a number of micronations, to include the Republic of Molossia, the Royal Republic of Ladonia, the Grand Duchy of Westarctica, the Kingdom of Ruritania, the Principality of Aigues-Mortes, and the United Slabovian Empire.

The Charter formally establishing the Board for the Hall, and the existence of the Hall itself was officially adopted on 21 May 2020. Bylaws governing the Voting Body and selection process were officially adopted on 15 June 2020. Voting for the inaugural class concluded on 1 December 2020, which was inducted on 6 August 2022, as part of MicroCon 2022.

The voting body is comprised of nations who will nominate and select individuals for induction into the Hall of Excellence. Member nations include:

Listed below are the individuals inducted into the Micronational Hall of Excellence.