Order of Arlene I

The Order of Arlene I was an order of chivalry in the Empire of Agber. The official intention of the order was to honor those who had distinguished themselves. It was created on 15 March 2013 as the lowest order encompassing the Empire. It was dissolved alongside the Empire on 1 November 2022.

The order was created to give Empress Arlene a relatively cheap way to recognize excellence in individuals at events as an on-the-spot means of recognition. The award was bestowed at Renaissance Fairs, Medieval Times, and Highland Games for a variety of categories. The categories recognized included jousting, hand-to-hand combat, costuming, music, blacksmithing, glass-blowing, and woodworking.

The order had two classes which utilized the same regalia worn in the manner appropriate for the rank awarded: 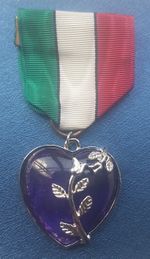 During the reign of Empress Arlene, award of the Order of Arlene I was typically done as an impromptu small ceremony, where the Empress had the honoree kneel before her. She then knighted the individual with use of a ceremonial sword. She would then pin the medal to their chest, or draped the necklet over their head, in cases where the rank of Knight or Dame commander was being conferred. Next, she bade them to rise as a Sir or Dame. In the latter years of her reign, the ceremonial sword was often replaced by a scepter, at times, due to changing security concerns at Renaissance Festivals and other such events.

A number of the regalia of the order were typically carried by a member of the Empress' retinue, to allow for the "on the fly" approach to the honor. There was initially an attempt to keep records of the individual awards. This was quickly abandoned, as it was seen as ineffective and contrary to the intent of the award.

Unlike other orders of the Empire, very few citizens of Agber or its dependent nations have received the honor. A very large number of the awards have gone to young children who have dressed up for the events attended by the Empress. The Empress said in 2020 that these interactions are some of her favorite moments of her reign.

The outgoing Empress elected to leave the order as one of the Empire, and to not transfer it to Koliosian control when she abdicated in 2021. While awarding the honor was within the rights of Emperor Devon, he never bestowed the honor. The Shogunate he leads has an award that serves a similar function: the Order of the Peach Blossom, which wound up filling in for the Order of Arlene I functionally.