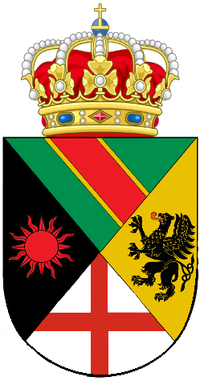 The arms of the House of Mendoza-Vega

The House of Mendoza-Vega is a line of micronationalists who have held either the throne or other high administrative office within a number of nations, most notably within the Empire of Agber. Although activity of the line traces back to 1995, it was not formally established until the summer of 2020, when Arlene of Kolios gave the house its name and drafted a coat of arms, cementing herself as the head of the noble house.

History of the House

Empress Arlene became the first member of the house in over 100 years to hold a noble title, when she was named as a Princess and the heir to the throne for the newly founded Kingdom of Kolios. She would ascend to the Koliosian Rose Throne in 1997 when King Stephen abdicated, elevating her to Queen. Other members of the Queen's extended family would join her in her endeavors beginning with the establishment of the Empire of Agber the following year.

Over the years, members of the one-time Empress' family would serve in a number of senior roles for nations within the Empire. In addition to Kolios, Carthage, Cordova,Liguria, and Verdura have all had a member of the Mendoza-Vega sit upon their respective thrones.

In 2020, owing largely to the rise in influence her extended family was seeing within the Empire, then Empress Arlene decided to create a more formal collective body for the individuals. After consulting with another distant relation who had done extensive genealogical work, she settled on the name Mendoza-Vega. The House of Mendoza-Vega was named for two lines of nobility during the Kingdom of Spain that Empress Arlene was able to trace her heritage back to. Portions of the coat of arms are pulled from House Mendoza's ancestral arms, with others taken from more recent heraldic traditions within the Empire.

The Order of the Griffin 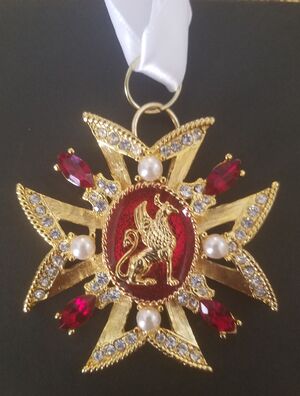 Regalia for the House of Mendoza-Vega's Order of the Griffin, Knight or Dame Commander

In the summer of 2020, shortly after formalizing the House, Arlene established the Order of the Griffin. The Order is so named for the griffin borne on the House arms, and is intended be awarded to all members of the house active in micronationalism. The Order is unique in that a majority of voting members of the Mendoza-Vega are required for award. The order has three ranks: