Order of the Snowflake 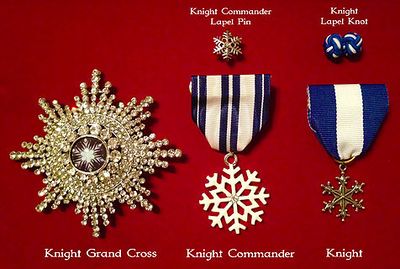 The Order of the Snowflake is the second highest Order of Westarctica. The intention of the Order is to honor those who have provided a service to Westarctica. It was created in January 2015, with a new rank of Grand Commander being added in August 2020.

There are four classes of the Order:

Only the Grand Duke himself has the power to bestow new knighthoods and thus far, he has awarded the medal to foreign dignitaries, artists, prominent nobles, and other supporters of Westarctica. All knights and dames receive the medal respective of their class and the award is for life.

The Order is considered a "self-styled" one, with no connection to existing or historical Orders of Chivalry.

Membership in the Order of the Snowflake entitles the bearer to attach the post-nomial "KtS" of "DtS" following their name. In this way, they are living examples of the Westarctican ideal.

The class of Knight Grand Cross has always been reserved for Heads of State and members of the Royal Family. 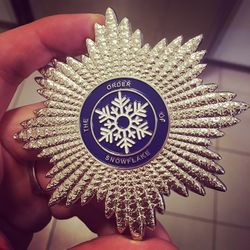 The rank of Knight or Dame Grand Commander was created in 2020 by Grand Duke Travis. The impetus for the move was two-fold. First, while he found the new regalia striking, he felt it still didn't quite measure up to the original breast stars for the rank of Knight Grand Cross, which he had experienced difficulty in procuring extra of. Second, the rank of Grand Cross had been originally reserved for heads of state and their consorts, both foreign and domestic. This move addressed both concerns in a way that was decidedly simple.