Illustrious Antarctic Order of the Orca 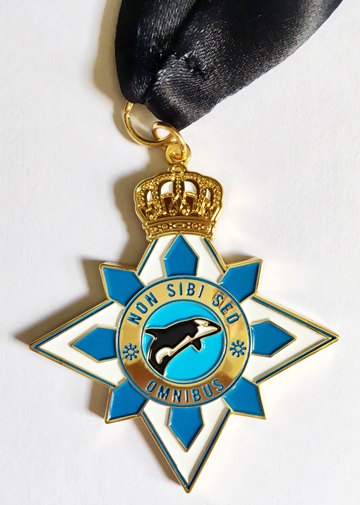 The regalia of the order

The Illustrious Antarctic Order of the Orca, commonly referred to simply as the Order of the Orca is the highest Order of Westarctica. The intention of the order is to honor those who have provided a lifetime of service and dedication to Westarctica and its ideals. The order was formally established on 10 July 2019.

Inspiration for the order was taken from the United Kingdom's Order of the Garter. The order was officially established on 10 July 2019 and the first awards were presented at MicroCon 2019.

Structure of the Order

As the Illustrious Antarctic Order of the Orca is a chivalric order, membership is conferred at the sole discretion of the Sovereign. The Royal Council may make recommendations, but the Sovereign is under no obligation to heed them. All members of the order are entitled to attach the post-nominal "KtO" or "DtO" following their name.

The order only has a single official rank: Dame/Knight of the Orca, which is limited to 14 regular members, who are appointed for life. These are sometimes referred to as numerary members. While there is no specific criteria, these members are intended to be those citizens who have provided the greatest services to the nation. This is often measured as a body of work across years or even a lifetime. There is no minimum number of knights or dames the order must have, but the accepted wisdom is that vacancies should be filled as worthy candidates are identified.

The first category of supernumerary members of the order, Royal Knights and Dames, are not included in the 14 regular members. Although the Grand Duke is the Sovereign of the Order, making him a member ex officio, he still falls into this category. Royal Dames and Knights may include the Royal Family; the Sovereign's Consort, as well as any adult issue, including those named as such who no longer meet those specific qualifications. There is no limit to the number of Royal Knights and Dames, but effort is made to keep this number reasonably small.

The other category of supernumerary order members, Stranger Dames and Knights, is limited to 7 living persons, in addition to the 14 regular members. This category is for non-Westarctican citizens. This is primarily utilized for Heads of State, in recognition of its closest allied nations, but may be bestowed to any foreigner. Like with regular Dames and Knights, there is no minimum number of members, but numerary vacancies should be given priority.

Regalia of the Order

The regalia of the order is a medallion suspended from a 3/4 inch thick black ribbon worn around the neck. Feminine members of the order may elect to wear the medallion at formal events suspended from a black bow, worn as a brooch. The medallion is based upon a design by Duke Jordan of the Bear Peninsula with assistance from Sir Michael the Ellsworth King of Arms, meant to honor the history of the nation.

The medallion itself is 2 1/4 inches wide and 2 1/2 inches high. The medallion is topped by a crown, to indicate the rule of the Sovereign. In the center is a depiction of an orca, a native of the waters of Westarctica, surrounded by water of an icy blue. The orca was selected due to its depiction on the nation's lesser arms. They were additionally chosen due to their status as an apex predator, communal nature, and gentle disposition known for becoming aggressive when necessary. The orca is surrounded by the words non sibi, sed omnibus which means not for one's self, but for all in Latin. The outer shape is a white star with 4 points, to represent the four eras of the nation's identity, prior to creation. Aligning the interior circle are 8 smaller points in blue, to symbolize the different phases of Westarctican government at the order's creation:

The reverse of the medallion bears the words "GRAND DUCHY OF WESTARCTICA" the Roman numeralization of the year the order was established (MMXIX), and the membership number of the awardee, in Arabic numerals (i.e. 01). Although they are bestowed a membership number, just as a regular Knight or Dame, supernumerary members are denoted by a letter; -R for Royal and -S for Stranger.

List of Current Dames and Knights of the Order 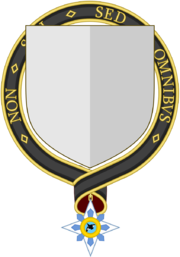 Arms device for the Order

Members of the order are permitted to add an encircling device around the escutcheon or lozenge of their personal arms. The device was created by the Second Ellsworth King of Arms, based on input from Prime Minister Jordan Farmer. The official description of the device is as follows:

A Sable ribbon device with Or trim encircling, bearing the motto of the Order, "NON SIBI SED OMNIBUS," lettered in Or, with the badge pendant suspended.