From MicroWiki, the free micronational encyclopædia
(Redirected from Vikesland)
Jump to navigation Jump to search

The Kingdom of Vikesland, also simply known as Vikesland was a Canadian micronation founded in 2005. Its declared land could be found in Canada, U.S.A., Britain, Australia and Europe and was wholly owned by the royal and government noble families. The Capitol of Vikesland was The Royal Ranchlands, A 168 acre land base near the east side of riding mountain national park in Manitoba Canada. Just over an hour away to the south was the Vikeslandic Embassy of Brandon. It's residence, owned by the King and Queen, was where a majority of administration for the nation took place.

It was prominently featured in the 2006 book, "The Lonely Planet Guide to Micronations," was a micronation declared as a sovereign democratic monarchy, a nation of people who have come together as citizens and wish to build and be involved in the operation of a new micronation. The Territory was comprised of privately owned land declared Vikeslandic land. The hope of King Christopher I was to someday through peaceful negotiations and or purchase, have a defined sovereign territory in which the Principality of Vikesland could permanently establish itself.

Vikeslandic people declared that they were not rebel seccesionists, were peaceful people, and were proud dual citizens with the other countries in which they resided.

In 2018, King Christopher I announced Vikesland would relaunch into a new nation, The Jarldom of Vikesland. It was scheduled to relaunch in 2019, but questions were raised when it failed to meet this deadline. The matter was put to rest when the former King joined Westarctica in January 2020, being made a Prince and Duke.

One set of criteria for statehood under international law is defined by the Montevideo Convention. This asserts that a defined territory, permanent population, government and the capacity to enter into relationships with other sovereign states are the only foundation requirements for a sovereign state. None of these requirements necessarily has to conform to a certain size or standard, but their general characteristics should be taken into account.

A similar set of criteria for statehood is found in the European Community Opinions of the Badinter Arbitration Committee. The committee found that a state was defined by having a territory, a population, and a political authority. The committee also found that the existence and disappearance of states was a question of fact, while the recognition by other states was purely declaratory.

Vikesland possessed a simple constitution, which consisted of a preamble, six parts and sixty-two articles. The preamble asserted the founding of the Kingdom of Vikesland, while the articles variously dealt with Vikesland's status as a secular, sovereign, and democratic Monarchy, the empowerment of government bureaus, the role of an appointed, royal council, the functions of an appointed and the hereditary succession of the monarchy.

Vikeslandic Government was a Democratic Monarchy meaning that all laws were passed by free vote. There was a chancellor and vice-chancellor that were nationally elected to represent the citizens of Vikesland in the Royal Council. The King was the head of state and leader of the Principality. The Royal Council was comprised of The King and Nobility as well as elected officials and Ambassadors. The Royal council took care of all national issues such as creating laws and policies. All decisions passed by the Royal council required a two thirds majority vote to become binding. 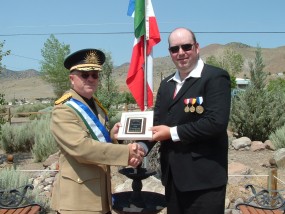 His Excellency Kevin Baugh of Molossia and King Christopher of Vikesland in Molossia, June 2008.

The Kingdom of Vikesland's criteria for recognition of other states was very similar to that of the Montevideo convention. If the requesting state met the criteria providing proof, they were automatically recognized.

The Kingdom of Vikesland had recognition proclamations for: 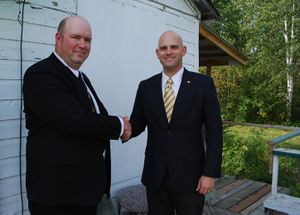 During the week of 23–29 August 2010, Vikesland hosted King Montague of Calsahara for the first state visit on Vikeslandic soil. Many diplomatic activities occurred, including official tours, state dinners, an awards ceremony, and a joint military exercise. Also, King Christopher established an official embassy for Calsahara by proclaiming a remote hunting cabin to be sovereign Calsaharan territory.

The state visit was a tremendous achievement for both nations, especially considering the vast distance separating the countries. 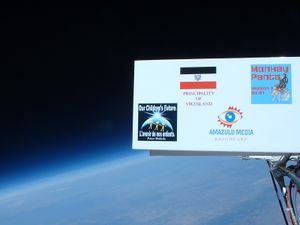 A picture of the flag taken aboard the Away 35 mission.

The Kingdom went down in history as the first Micronation to send its flag to the very vacuum of space. On August 16, 2008, Vikeslands department of Aeronautics and Space sponsored J.P. Aerospace's Away 35 mission. On this mission, the flag of Vikesland along with other sponsoring corporate logos were sent to the edge of space. 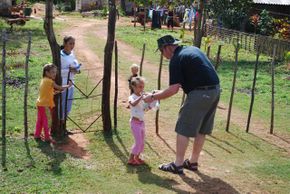 King Christopher handing out goods to a poor Cuban family.

The Royals of Vikesland also conducted humanitarian trips to bring items of need to the very poor areas of Cuba. Items such as school supplies, clothing and hygiene items and simple over the counter medicine such as aspirin were handed out to locals.