Order of the Grizzly

The Order of the Grizzly is an order of chivalry within the Empire of Agber inside of the Reino de Cordova. The intention of the Order is to honor those who have provided a service to Cordova. It was created on 27 August 2016 by then Baron Devon as a way for him to recognize excellence and achievement, separate from the Order of Cordova, for which he was not the font of honor.

There are two classes of the Order, each with their own unique regalia:

The current Sovereign and font of honor for the order is Reina Celestina, as the reigning monarch of Cordova. While her current rank of Dame Commander officially is equal in precedence with others who hold that rank, her status as Member Ex-Officio gives her functional precedence within the order. 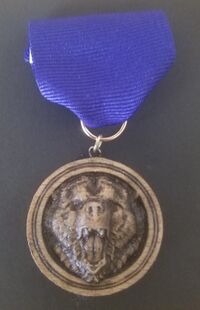 Medal of a Knight or Dame of the order