Order of the Mariposa

The Order of the Mariposa is an order of chivalry in the nation of the Reino de Cordova, a part of the Empire of Agber. It was created on 27 August 2004. It is one of the few orders of chivalry in the Empire that neither former Empress Arlene or the current Emperor, Devon, are not a member of.

The order has only one class; Dame/Knight. Members of the order may wear the medal of the order, worn from an orange drape ribbon.

The order was conceived as a way to recognize excellence in conservation work by then Baron Gilbert. Ten pieces of regalia were acquired. Since this initial run was exhausted, no further awards of the order have been bestowed, despite it still being considered active. Although Reina Celestina could technically be considered a member of the order, as the Sovereign, she does not claim membership in the Order of the Mariposa. 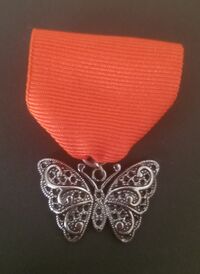 Medal of the Order of the Mariposa