Order of the Desert Heart 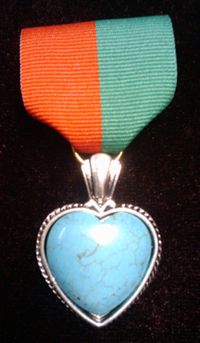 Regalia for the Order

There are three ranks of the Order:

As the Overlord of Calsahara, Grand Duke Travis is the current font of honor for the order, although previously, it could be awarded by either King Nicholas or the Dictator for Life.

The regalia for the order is a silver and turquoise heart suspended from a red and green ribbon. Turquoise is a common semi-precious stone found desert areas in the North American southwest and the red and green ribbon contain the colors of the original flag of Calsahara.

History of the Order

Upon creation, the Order of the Desert Heart served as Calsahara's highest honor. As the nation had no permanent residents, and very few citizens, its de facto function was to serve as a means of recognizing fellow micronationalists who supported Calsahara and its leadership. It is a common practice in the micronational community (as well as in macronational circles) to exchange national honors, to signify mutual respect and friendship between nations. As such, the majority of awards of the order were to foreign heads of state. The only notable exception to this was Sam Green, who was made a Knight of the order for his actions in the liberation of Calsahara. This membership is also notable for technically being the final time the order was bestowed as an order of a sovereign Calsahara; as the knighting took place after the military phases of the liberation, but prior to the signing of the Article of Eternal Union, which marked the official beginning of Calsahara's status as a colony of Westarctica.

Calsahara as a Colony of Westarctica

After becoming a colony, the majority of Calsahara's orders were declared to be in disuse, meaning that members of said orders may still wear their regalia at events in Westarctican and Calsaharan sociteties, but that the respective orders would no longer be issued. This is due to their function no longer being in line with Grand Duke Travis' vision for the colony, or their function being deemed redundant by overlapping with Westarctica's knighthoods and Honored Westarctican Awards. The Order of the Desert Heart was preserved to provide a knighthood that dealt with Calsahara specifically. As such it is rarely awarded, but both awards given since becoming a Colony of Westarctica have been to Westarctican citizens.