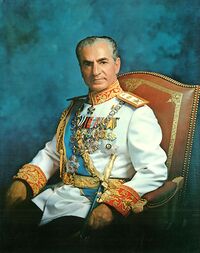 Mohammad Reza Pahlavi, who served as the last Shahanshah of Iran from 1941 to 1979.

Shah (Persian: شاه‎), known Imperially as Shahanshah (Persian: شاهنشاه) is a royal title of Persian origin. The title is used most commonly to denote the monarch of a country and is comparable in rank to that of a King. Alternatively, the title can be used to denote a sovereign of equivalent rank to that of an Emperor though this is rarer and often is accompanied by the changing of the title from Shah to Shahanshah (literally translating to "King of Kings") or Padishah (translating to "High King" or more literally to "Master King").

Currently, no macronational state uses the titles of Shah or Shahanshah with the last macronational Shah, Mohammad Reza Shah, passing away in 1980 and since then, the only individual that could be theorretically considered a Shah being Crown Prince of the Iranian Imperial State Reza Pahlavi who would be eligible for the title should he ever return to the throne of Iran.

In a micronational context, the title is incredibly rare and as such, very few micronations utilize the title or any derivative thereof.

Micronations who have used the title