The flag of St.Charlie is a horizontal bicolour formed of two horizontal blue stripes enveloping a red stripe. The red stripe is slightly bigger than the blue lines. A blue star is located in the middle of the flag.

The flag was adopted by the National Party of St.Charlie the 23rd of November 2008, when, after the November revolution, the newsly-established Parliament published the basic law. The flag was previously used as banner of the Movement for St.Charlian Liberation.

The flag of the Kingdom of St.Charlie was developed in 2000 by Patrizio I. It was very similar to the Italian tricolour except that in the middle, the portrait of the Monarch was shown. After the November Revolution, the revolutionaries created a new flag and made it the official banner of the newborn Federal Republic.

The blue stripes stand for the revolution, as during the Revolt in the Vendée against the French revolution, blues stood for the revolutionary forces, but the color also stands for Secularism. The red is used for remembering courage of the people of the November Revolution, but it also stands for loyalty, honor, success and fortune, as it is its meaning in various Asian countries. The star in the middle represents the November Revolution itself, as after St.Charlie, the blue star is the symbol of the movement which led the revolution.

The flag is customarily shown during sunny days at the Presidential Palace and in the territory of New Ridgeway. It is also forcedly shown on public holidays like Republic and Constitution Day, the Birthday of the President and May Day.

The flag ratio is 3:4 (height/width). Recommended colours are: 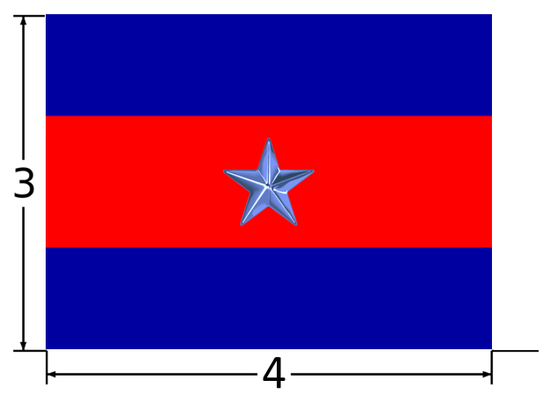 Flag of the St.Charlian Government

The flag of the St.Charlian Government is adopted and can be used by all members of the Cabinet of Ministers. 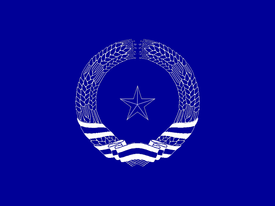 Flag of the Government

Colour scheme of the flag of the Cabinet of Ministers is: