The Dale national football team was formed after discussions by the King of the Kingdom of the Dale Empire, King Danny Clarke I and James Hunt, who eventually became the teams first manager and head of the Dale Football Association, the discussions were over how the Dale Empire was able to expand its culture. The team was officially founded in early August 2011, and the national team was passed over to the Dale Republic after the transfer of the micronation's political system. However, because of the micronations exclusivity as a Surrey based micronation, where other micronations are difficult to compete against has ment that the national team has failed to play an official fixture before the Polination Games were arranged between the Dale Republic and DES Senya.

The home colours of the Dale national football team were originally based on the previous flag of the Dale Republic, with each colour being represented on one item of the kit, shirt, shorts and socks. While the current home kit reverts to these colours after previously being a full blue kit. The goalkeeper wears a orange and black kit home kit. The away kit is a red shirt with white short and blue socks with the goalkeeper having a white and black away kit. The crest of the Dale national football team was originally based on the crest of Woking Football Club, but is now based on the logo of the Dale Football Association and Dale Football Club.

While the team has no official sponsor it is considered to be sponsored by Dale companies such as Visit Woking and Woking Defence Systems. However, none of these are official and are not endorsed by the Dale National Football Team but there is considered to be its intent to have an official sponsor in time for the 2013 MFA World Cup should the team decide to take part in the competition. The Teams first kit was split for main manufacturer with Puma and Sondico both being the primary manufacturers of the teams kit. Puma is the current the chosen kit manufacturer for outfield players exclusively without and Sondico kit. Togasport us used to supply goalkeeper kits.

Churchill stadium was the official name used by the Dale National Team of what is called more locally as the cage for its fenced walls, the Dale national team uses the pitch for all of its Home matches and was originally located within England until it was within the Dale Republic during the political reform. The original pitch for the dale team was Goldsworth stadium a location within the dale empire's Goldsworth park Lake Region until the Churchill Stadium was decided to be better for matches.

The Dale national football team also uses two other pitches from training and also low cost matches. These are Goldsworth Grounds, located in the community of Goldsworth Park and The St. John's Lye, located in the City of St. John's. These grounds are the primary training areas of the Dale national football team and are a reserve match pitch for short notice and low cost games. Both grounds have a high standing capacity because there isan't any fences to restrict capacity. Both pitches are close enough to the Churchill Stadium to be within walking distance, allowing the team to play up to as little as 10 minutes before a game. 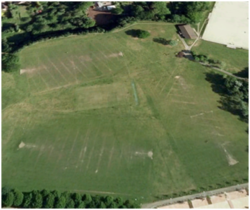 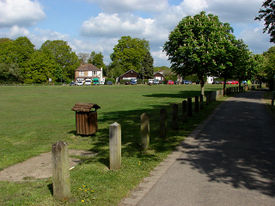 The Woking is a football team mainly consisting of players from the Dale Republic / Woking borough, but sometimes players from other areas are invited to play. Woking is a joint Dale-English football team designed to assist the Dale Republic in training for the Polination Matches. The team is filled by both Dale and English nationals and is open to everyone who live in or around the Dale Republic. The team has no head coach and instead the team captain will normally take the role. The Woking play only unofficial training games against the Dale national football team. Because of this, no governing body in the sport officially recognises the team and each incarnation of the team aren't generally seen as a continuation of each other. Because the Woking team is only used for training matches and neither team has to wear their full team kit, the teams only play with shirts, this means for matches the Woking team only wears white colour shirts.

The Dale and Rukora national football teams are minor sporting rivals who have played each other since mid 2012, to date the Republic of New Dale and Federal Republic of Rukora have only played 1 virtual match and no real world match yet a football rivalry quickly developed on the basis that the two micronations are the only ones to exist in Surrey. Their first encounter was a virtual match in the group stages of the 2012 MicroWiki Cup where they were both in Group B, the Dale Republic beat Rukora 2-1 after goals after a second half goal from Danny Clarke gave the Dale Republic the lead needed to win after Rukora equalised just before half time.

The Dale and Senyen national football teams are minor sporting rivals who have tried on several occasions to organize fixtures, the latest having been planned planned for late october/ early november 2012. The two teams have only played each other in virtual football.