The Micronational Football Association, commonly known by the acronym MFA, is an international football body of association football for micronations with futsal and beach soccer having never been discussed as the responsibility of the MFA or not. Its headquarters are located in Norfolk, and its current president is Aidan McGrath, who assumed the Presidency of the organization after holding a council meeting with himself as the other members were inactive for a period longer than 6 years. The MFA is responsible for the organisation and governance of football's major micronational tournaments, most notably the MFA World Cup, which is scheduled to be held in 2023. 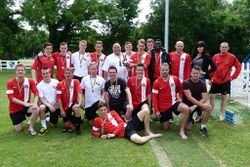 The national football team of Sealand in 2013, who joined the NF-Board in December 2003.

Micronational football had always lacked a governing body. Throughout the 1980's Vikesland and Molossia both expressed interest in playing football, although, with the disestablishment of the North American Soccer League (NASL) in the mid-1980s, both nations abandoned plans. Sealand formed a football team in 2003 and joined the NF-Board in December 2003. The Micras sector founded the FMF in 2006, but this organisation only governs virtual fixtures between Micrasian nations. In 2009, the MFA was founded by Joe Foxon.
The organisation grew on the Wikia, especially in 2009, when the host nation was announced for the 2013 World Cup. In 2010, the organisation expelled several nations, notably Tiana and Libertaria for inactivity, and in 2011 after the dissolution of Prometheus, membership fell to 8. However, Fiharaya and Pambia joined in the spring of 2011, and in the summer the Dale Empire (now Dale Republic) joined, meaning membership rose to 11.


On September 10, 2011, Joe Foxon was officially replaced as President of the MFA by Barnaby Hands, with Foxon siting personal reason for his unexpected departure. Hands quickly rolled out his first six-point annual plan, which would see the introduction of the VMFA and its various competitions. The organisation enjoyed a minor level of success with multiple fixtures being played between MFA members between 2011 and 2013. However, these fixtures were limited to the 3 Norfolk, England nations of Dallingrad, DES Senya and New Persia. Despite efforts to organise a number of MFA competitions, especially the MFA World Cup in 2013 and 2015, the organisation declined into a state of effective inactivity following the last fixture played between 2 MFA members a 10-9 win for Dallingrad over DES Senya, and the last fixture involving any MFA member being between now-defunct member Caladonia in a 3-1 win over non-MFA team Maltmen. Despite claims of continued activity, little progress by the MFA to bring competitions or even friendlies since 2013 has left doubt in its effectiveness as an organisation to represent micronational football.

With growing inactivity by the MFA leadership and members, the MFA unofficially ceased operations in the Spring of 2017. Aidan McGrath assumed presidency of the organization in 2022, and has since tried to revive the organization as a replacement to the comparable MFF.

The MFA is made up of four regional confederations, unlike their FIFA equivalent MFA confederations do not have the same governing structure. The confederations are used to set boundaries for qualifications and regional competitions such as the MFA British Isles Cup, MFA European Championships and MFA America Cup.

The MFA has a President who oversees the running of the organisation. The founder Joe Foxon, was the original President. The President is elected by a majority vote of the council.

Procedures to join the MFA were originally progulmated on 23 July 2013, but were superseded by new ones after Aidan McGrath took presidency on 19 December 2022. All new members need to fulfill this procedure;

The following are the main partners of the MFA: