The first Dale Woking micronation was the Kingdom of the Dale Empire, based in Woking but claiming territories on every continent. The Kingdom of the Dale Empire was an absolute monarchy, ruled by King Danny from 22 May to 22 September 2011.. However, historic dale is believed to have been founded in either 2008 or 2009 and very little else is remembered about this early micronation even though it's king has not changed between historic and former Dale Kingdoms. This means that historic dale as its known to be is believed to have been founded 3 years before the former Dale Empire but could be considered parts of the same kingdom despite this time difference. Between the 7th and 8 September 2011 there was a poll on the MicroWiki forum which was to decide the future of the Dale Empire on whether it was to remain a monarchy or to become a republic, However because the poll ended as a tie it was left to a random name selector which selected the Dale Republic to be the victor of the political change.

The first President of the Dale Republic was elected the first day of the Dale Republic and was Danny Clarke on behalf of the Woking Independence Party and later the Woking People's Nationalist Party, he served his entire term before James Hunt was elected on April 30 2012. However, he soon resigned after 3 days from this position which led to a dispute over how his resignation should be handled, while some believed his deputy, Daniel Townend, should continue the remainder of his term, almost a complete term, others believed a new vote should take place and Daniel should only be an interim president until this can take place. This led to deep dispute and even near hostilities between some citizens of the Dale Republic. A by-election was eventually done and James Hunt regained his position as President of the Dale Republic after just 2 weeks after his resignation.

After the Surrey Democratic Republic fell into inactivity and other failed attempts to restart, agreement was finally met on March 21 to found a new democratic Woking based micronation. After some debating and voting it was finally agreed on the 25th for the Republic of New Dale to be the new Woking based micronation, a direct democratic micronation with a president in a largely ceremonial role. Presidential voting which started on March 31 and ending April 1 the Danny Clarke would become the first President of New Dale. However, because of the areas of the republic still undecided the president would be responsible to proposing the final aspects of the Republic of New Dale which would then be voted for by the people of New Dale. It was also decided that this new president would have only 1 month to complete this before a new presidential vote for a primarily ceremonial President of New Dale. On 2 May 2013 Danny Clarke was reelected President of the Republic, however with 2 citizens leaving and only 3 out of the remaining 5 citizens voting it was proposed by the president that New Dale should consider entering a political union and a referendum was quickly started.

This vote was done in the New Dale sovereignty referendum, the poll which ran for 2 days, between May 3 and 4 2013. What the referendum reached it conclusion only one vote had been cast, that of the President. This result was take as a reason to seek a political union with another micronation, even though the result might have led to it being redone had the referendum be aimed at a different matter. After a few attempts and reconsidering the idea of merging the Republic contacted the Republic of Westland who were considering disestablishment because of inactivity. An agreement was reached an on July 11, 2013 they formed the Delsh-Westlandian Federal Republic.

The Delsh-Westlandian Federal Republic was founded on the 11th July, 2013. The new state which keeps the Republics of New Dale and Westland as autonomous republics within, with each sharing a high level of autonomy to deal with any and all internal matters while federal matters are that of the federal government. The elections currenctly being taken place will decide the President of the Federal Republic and the First Ministers of New Dale and Westland, these three positions will create the federal government. When the election was approaching no political parties were created in the Republic of New Dale, this decision was largely influenced by the troubles experienced during the latter months of the Dale Republic. Without political parties both individuals which ran for political positions within the Federal Republic, Danny Clarke and James Hunt, each ran as independents.

On July 21, 2013, both were elected to separate positions, James Hunt was elected the first Delsh First Minister and Danny Clarke was elected the President of the Federation. On September 22, 2013, territory from Guildford Province which consisted of the City of Guildford were donated by the Republic of New Dale to the Federal Parliament in order to create the Guildford Federal City, capital of the Delsh-Westlandian Federal Republic and is no longer territory of New Dale, however it is partially administrated by New Dale due to the creation of the joint legislature, the Dale-Guildford Council. Following a long period of declining activity in the Republic of New Dale and the Delsh-Westlandian Federal Republic as a whole it was decided that New Dale would dissolve with little intention at the time of reforming into a new micronation and while since was considered at the time a no return decision, this plan was eventually ignored.

Since the dissolution of the Republic of New Dale the idea to establish a new Dale-Woking micronation to rekindle the historic days of the Dale Republic had long been floating around, almost without real intention. However, on June 1, 2015 former New Dale First Minister Danny Clarke proposed the thought to several former citizens to test public opinion. However, the idea quickly gained support with former Dale Republic citizens and eventually the proposal to establish a new Dale Republic was supported by what was considered a reasonable minimum of citizens, but with considerations such as schedules and lifestyles having to be accommodated the previous representative democratic system was seen as unsuitable so an entirely new system had to be created from scratch. The system described as "a non-partisan directional Republic with legislation passed by popular vote", inspired to a degree by the government system of Switzerland was chosen and immediately found support among the now citizens of the reformed Dale Republic, with elections for the new Dale Assembly being scheduled for the first weekend after reformation using a voting system of cumulative voting.

The elections ended with expected candidate Eamon Ali winning by a significant majority of the votes, 14 of the 25 votes cast, and being elected President of the Dale Republic. Second came Danny Clarke and in joint third was James Hunt and Chris Barnes, requiring a run off vote to decide the 3rd seat. However, immediately after announcing the results of the election Danny Clarke stepped down from his newly elected post in the Dale Assembly in favour of avoiding a run off vote and allowing both James Hunt and Chris Barnes to sit in the Dale Assembly. However, friction quickly formed over the handling of administration rights of the nations main communication network, despite winning the election Eamon Ali was denied admin rights by members of the Dale Assembly, with opponents citing the lack to need in these powers given his role as chair of the collective head of state that is the Dale Assembly. However, the majority of the Dale population voted in favour of Eamon Ali obtaining admin rights which the Dale Assembly would eventually give to him.

Following the completion of peace plans the political activity declined in the Dale Republic as it took a more significant social role, outside that of politics, with control over the Dale Republic becoming a grey, unclear topic, but with all citizens content with the status quo that had formed, little had been done to create another upheaval, this has led to a system of effective anarchism, without an official change in system the change had occurred naturally to an anarchy system without any form of state control over the Dale Republic.

The Dale Assembly is the law making body in the Dale Republic. There are 3 assembly members in the Assembly, which are elected for the head of the 3 government departments in order to take their partliamentary seats, the departments of Internal Affairs, External Affairs, and Culture, Media and Sport. Parliamentary elections are held at least every 6 months.

The Assembly has the power to decide the direction of domestic and foreign policy; approve or amend the constitution; declare war on another state; ratify or annul international treaties; and control the activity of state radio and television, state news agency and other official information media. 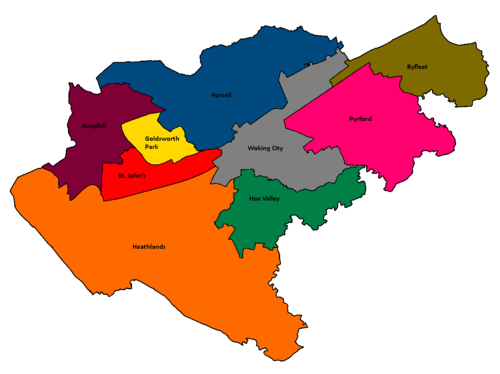 The Dale Republic is divided into 9 districts, incompasing 3 city, 6 towns and 11 villages. The cities in alphabetical order is the City of Knaphill, the largest population centre outside of of the capital, the City of St. John's, granted city status for its historical connection to the Dale Republic's past as the birth place of its predecessor, the Dale Empire and Woking City, the capital city of the Dale Republic. After the 3 cities are the 6 towns which act as the seats for the other districts of the Dale Republic, these are Byfleet, Goldsworth, Mayford, Old Woking, Horsell and Pyrford, and finally the 10 villages are the last division on population areas and are the smallest, including their district these are West Byfleet in Byfleet, Brookwood, Hook Heath and Sutton Green in Heathlands, Kingfield and Westfield in Hoe Valley, Maybury, Pyrford Green, Pyrford Village and Ridgeway in Pyrford and Sheerwater in Woking City.