The City of St. John's known as a village in the United Kingdom is classed as a City in the Dale Republic, the City of St. John's has a population of 4,378 and is located some 4 miles from Woking City, the capital of the Dale Republic. Neighbouring communities include Goldsworth Park, Hook Heath, Horsell, and Knaphill. The city lies on the Basingstoke Canal (completed in 1794) and dates largely from the 19th century, when housing first began to be constructed in the area to accommodate workers employed at the local brickworks. 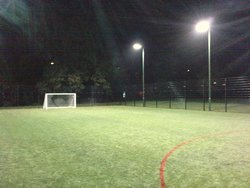