ABC One (stylized as abcONE) is the flagship ABC television channel available in the Ashukov Federation and through the worldwide web internationally. It was launched on 1 March 2014 as ABC, and is the oldest television channel in Ashukovo. In May 2014, and as new sister channels were created, it was renamed to ABC 1, with the current spelling adopted 4 months later. ABC One regularly broadcasts in a quality of 576i and a 16:9 aspect ratio, while videos uploaded to the internet tend to be in a 1080i high definition quality. According to the latest Ashukov Television Viewing Summaries (ATVS), 100% of Ashukov viewers watch ABC One.

ABC One is directly managed by the Television Directory of the ABC.

ABC One, as ABC at the time, first made its presence online with the upload of a test ident on 7 January 2014. Named "ABC Intro", it was a 13 second video which featured several red-blue-white slides crossing the screen until they remained stable and when one could read "ABC" and "This is an ABC broadcast" in the centre and on the left side respectively.

2 months later, on 1 March 2014, ABC made its proper introduction to the public, with the transmission of former President Sebastian Schriber's inauguration and first speech. In this first new broadcast, the very first ABC News graphics were introduced which included a countdown, an intro and several lower-thirds and text screens. This broadcast was also the first one to be sponsored and include an advertisement by the University of Ashukovo. The 5 seconds long ad encouraged citizens of Ashukovo, and not only, to enroll to the UofA.

With the instance of the Victory Day Holiday in Ashukovo, ABC, which had already been renamed to abc 1 due to the introduction of new channels such as abc2 or abc+, broadcasted the Russian Victory Day Parade which took place in Moscow, Russia. In this first broadcast as abc 1, a semi-transparent channel logo appeared for the first time on the upper right side accompanied by St. George's ribbon. The broadcast, which was with no vocal description, featured lower thirds explaining to the viewers what they were watching. In this broadcast, a modified version of the ABC Intro was used, displaying the new logo and the updated typeface. In addition, a new tune was used for the opening and the tune of the national anthem of Ashukovo replaced the tune of the Russian one.

The 10th of July 2014 saw abc 1 changing its name due to a major rebranding effort by the ABC. The channel came to be known by "abcONE", reflecting the channel's new logo. Onday later, the channel completed its first test live stream broadcast, opening the doors to the 2-hours-daily broadcast plan. This first broadcast was a speech of Vladimir Putin in which he announced the independence of Crimea. 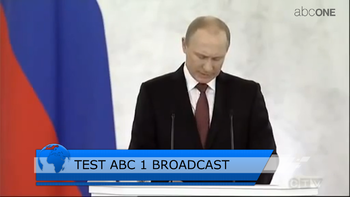 ABC One broadcasts almost entirely in English. This is because, as the first channel of ABC, its content must be available and comprehensible by all of Ashukovo's citizens and based on the logic that English is the most widespread language throughout the Federation, it was decided that English is the most appropriate and suiting language for a channel like that. However, content in Ashukov language and in some instances even in Russian, has been broadcasted.

Regionally, ABC One offers special, localized versions of the channel which broadcast content relevant to the area they serve, including news and live events. These channels can be branded either after abc or ARB (Ashukov Regional Broadcasting), depending on the stylistic choice.

At the moment, and as a daily broadcast is being prepared, ABC One's content is limited. Programs produced by the ABC and currently or formerly aired include:

Moreover, production of others broadcasted by ABC One, are: