The Jarldom of Hjalvik, commonly referred to as Hjalvik (/hjælvik/), is a nation state located within the Orkney Islands of the United Kingdom. Its territory spans multiple claimed colonies, both islands and landlocked territories. Hjalvik declared independence from the United Kingdom on 29 August 2020, claiming multiple small stretches of land, before expanding larger afield. The area of Hjalvik is roughly 260.4 km² when including the Jarl Hakon Islands; Hjalvik’s Antarctic claims. The Hjalsk Armed Forces, operated by the Hjalsk Ministry of Defence, are responsible for the defence of Hjalvik. The Home Office manages all internal affairs within the Jarldom of Hjalvik. Someone from Hjalvik would be known as a Hjalsker, and their nationality would be listed as Hjalsk. On 28 September 2020, Jarl Juvan I helped establish the Nordic Assembly, with the Jarldom of Hjalvik becoming the first official member state. Since then, Hjalvik has played a large part in keeping the Nordic Assembly stable, attending several meetings regularly.

The capital of Hjalvik is the island of Hamarsey, and the largest local territory is the Thanedom of Sandvölr. Hjalvik is split into 5 main districts; Austfold, Midfold, Norþfold, Suþfold and Vestfold. Each of these districts is home to 1 or more Hjalsk territories. On 31 October 2020, the Hjalsk government introduced the status of thanedom for some territories. Governed by a thane, these territories would have the ability to write their own laws, and have smaller territories of their own under their domain.

Hjalvik is an Absolute Monarchy, reigned jointly by Jarl Juvan I and Jarl Keaghan I. Both jarls see over the Jarldom, and help manage Hjalvik’s economy, which is built largely on agriculture. Lord Max Hund is Hjalvik’s minister of defence, and sees over any military establishments awaiting construction or that have been constructed and ready to fall into operation. Hund monitors the weapon ownership in Hjalvik, with military personnel being armed with appropriate weaponry.

The name and language of Hjalvik were both inspired by Norse culture. In Old Norse, the name means "Hilt Bay", with "hjalt" meaning "hilt" and "vik", or more modernly "wick", meaning "bay". The nation was named by Jarl Juvan I, when thinking of Norse-sounding names for a new self-claimed nation-state.

The Flag of Hjalvik was adopted on 29 August 2020. It was designed by Jarl Juvan, representing the Orkney flag with its 8:11 proportion. The flag has been used as the national flag of Hjalvik ever since. The white Odal rune in the top left corner symbolises the Norse culture of Hjalvik, but also Odal being the letter 'O' in Elder Futhark, stands for Orkney; the Scottish county Hjalvik was founded in.

On 29 August 2020, Jarl Juvan I and Jarl Keaghan I were discussing the establishment of a self claimed nation. The idea of the nation was to be of Old Norse culture. On that day, Jarl Juvan I declared the independence of the Jarldom of Hjalvik from the Earldom of Orkney, and subsequently the United Kingdom. The flag of Hjalvik was designed the same day. 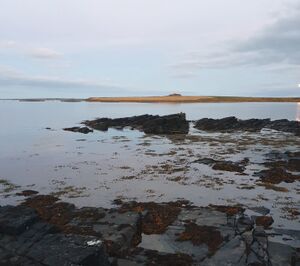 Hamarsey on the day of its colonisation.

On 30 August 2020, Jarl Juvan and Jarl Keaghan set out on a colonisation mission, where the territory of Hamarsey was claimed. This marked the first sovereign territory of the Jarldom of Hjalvik. Not long after the foundation, Jarl Keaghan took it upon himself to create the Hjalsk language; an official language to be used in legal documents within the Jarldom of Hjalvik.

Not long after the Jarldom’s establishment, Jarl Juvan I took it upon himself to create laws, services a national military. This marked the start of the Hjalsk Armed Forces. As the days went on, further territories were colonised, such as Bjarnihus, Klettholmr, Engrhus, and Haugsetr. Kenheim was initially decided to become a territory, although it was negotiated at the last minute that the land should become a Hjalsk dependency.

On 2 November 2020, a rebellion broke out against Jarl Juvan I during a Hjalsk Armed Forces training session. The rebellion lasted roughly 10–20 minutes, hence it is known as the Short Rebellion. Commander Horston of the Hjalsk Army began an attempted revolution against the Jarldom, with several other soldiers taking his side. Max Hund, Supreme Commander of the armed forces stood silent with dread, while Jarl Juvan tackled the situation. Lord Tek stood with Jarl Juvan during the entire rebellion, helping force the opposition to back down. Eventually, the rebellion was countered, and Jarl Juvan made a speech addressing the fact the Jarldom of Hjalvik is a free nation, and there is no need to rebel; Hjalvik will take care of any issues experienced by recruits of its forces. Lord Tek was awarded a Hjalsk Medal of Honour following the rebellion, for his service to Jarl Juvan, keeping the rebellion under control.

On 22 November 2020, the Jarl Hakon Islands were claimed by the Jarldom of Hjalvik. Named after Jarl Hákon Pálsson, they become the first Hjalsk claims that were not formerly part of the Earldom of Orkney. On 1 December 2020, Sandvölr was elevated to thanedom, making it the second thanedom in Hjalvik, with Jatvörþr Byhals appointed as thane of Sandvölr. Not long after his coronation, Jatvörþr Byhals announced he wished to abdicate on 1 January 2021. He did so, and his younger brother Julius Byhals took the seat of thane of Sandvölr.

1 January 2021 at 00:00 GMT was the first day of 2021 for the citizens of Hjalvik. That day at 12:00 noon, Jatvörþr Byhals of Sandvölr officially abdicated with Julius Byhals immediately inheriting the position.

On 5 January 2021, the HEME was established as the branch of the Hjalsk Armed Forces. The establishment would have three main yards; the Meiser yard, the Haugsetr yard and the Rosby yard. The Principality of New Tyne was annexed by the Jarldom of Hjalvik on 31 January 2021. This was the first dominion state of the Jarldom, and marked an important point in Hjalsk colonisation history.

On 17 January 2022, Princess Katriona I was appointed the role of Princess of New Tyne, taking over the position from Jarl Juvan I. In early 2022, Jakub Topheim announced that by the summer of 2022, Tanþheim would no longer be under Hjalsk sovereignty anymore. In February 2022, the Hjalsk government began preparations for the handover ceremony, and the economic consequences of losing such an influential thanedom. 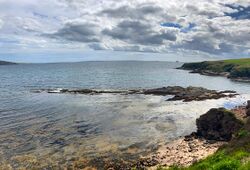 Hestavagr, one of Hjalvik’s island territories, consists of a skerry sitting on the shores of Scapa Flow.

Trees are uncommon on Hjalsk territory and are only found rarely on some territories. Brungarþr is a notable example of a presence of trees in Hjalvik. It has been concluded that from every single Hjalsk territory, the sea can be seen somewhere, usually either the Atlantic Ocean, the North Sea, or Scapa Flow. The feature of lakes on Hjalsk territories is uncommon, although not non-existent. Lake Meiser is the largest of water bodies on Hjalsk territory. In summer it is far smaller than in winter. The territories of Norþholmr and Suþholmr are both situated within Bulæk; a large lake in the Vestfold district.

Much of Hjalvik’s territory appears to be victim to coastal erosion. Orkney’s geology consists mainly of old red sandstone from the Devonian period. This means the rock is more vulnerable to coastal erosion, but easier to quarry. The highest elevation in Hjalvik is thought to be Suþþveit at roughly 62 metres above sea level. This is likely due to the island of South Ronaldsay being primarily made up of Eday group red sandstone. 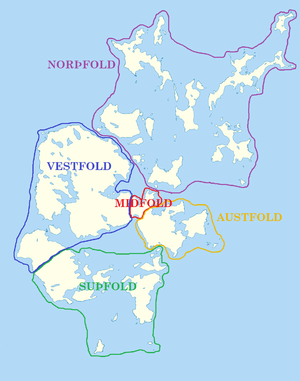 Map of the Orkney Islands showing areas divided up.

Hjalvik’s territory is split into 5 main districts; Austfold, Midfold, Norþfold, Suþfold and Vestfold. This makes it easier to govern, as each district has a local councillor. The Hjalsk Government has divided the Orkney Islands up into these districts, and any new territories claimed, depending on where they are, will be assigned into one of the districts.

The climate of Hjalvik varies across each territory, although wind and rain are both common everywhere in Hjalvik.

One of Hjalvik’s oldest services is its national military. The Hjalsk Armed Forces are divided into 4 branches; the Hjalsk Army, the Hjalsk Navy, the Hjalsk Air Force and the HEME. The armed forces are operated by Hjalvik’s Ministry of Defence, with much of the nation’s taxes going into the military funds.

Hjalvik has several companies operating within its territory. Some of these often export produce to the United Kingdom. Agriculture is a large industry within Hjalvik, with sheep farming, being one of the economy’s largest productions. chicken farming is also a large export, with freshly laid eggs being sold to British citizens as well as Hjalsk.

The Hjalsk skilingr is the national currency of the Jarldom of Hjalvik. The British pound sterling is also a valid currency in Hjalvik. The government accepts the pound in tax payments. The Hjalsk Government has no plans to phase the pound sterling out of circulation any time soon, as it will likely remain valid due to Hjalvik’s strong ties and borders with the United Kingdom.

Several parties operate within the Hjalsk parliament. Although the Royal Government dominates, other parties and politicians are allowed to run alongside, and campaign to the people for change and improvement within the Jarldom of Hjalvik, which would later be discussed by the government. Each parliament politician receives one vote in each government election. In order to gain a seat in parliament, a party must win the vote of a district by collecting the majority of the citizen votes.

The Hjalsk Government consists of the Royal Government party members, inevitably including both Jarls. It is in full control over law, order and punishment within the Jarldom of Hjalvik, and autocratically by constitutional law cannot be voted out of power.

The Jarldom of Hjalvik has a total population of 36 citizens. Many of these live within the territories of Hjalvik itself, although there are several citizens living elsewhere in Europe. 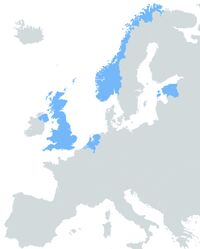 Each year, a record of the percentages of sex, nationality and population number is kept. This allows the Hjalsk government to follow along with the latest demographics of Hjalvik.

At the end of each year, the surveys are taken, with each new citizen reviewed immediately as they are granted citizenship, with the date of birth, birthplace and full name all taken down on record. The national birth records are kept by the government.

There are several micronations or states that Hjalvik recognises as independent, which the United Nations does not. On 21 September 2020, Jarl Juvan I got into contact with Emperor Jonathan I of Austenasia, who declared an informal friendship between both states. Hjalvik currently has 6 official alliances and 3 informal relations.

If a state wishes to become allied with Hjalvik, it may get into contact, and the Hjalsk foreign office will negotiate a deal.

The Jarldom of Hjalvik has signed a treaty of alliance with the following states;

Hjalvik has signed a treaty of mutual recognition with the following states;

The national holidays in Hjalvik are always days in which Hjalsk citizens do not have to work, unless it is urgent.

Hjalsk folklore is widely known throughout the Jarldom, and tales are told about mythical creatures that supposedly roam the Hjalsk lands. One notable piece of folklore is about a mysterious fox-like creature, known as the 'Wilikson Fox' that allegedly roams around the dependency of Jarnes, supposedly defending its native lands.