Bjørnavik, officially the Nordic Federation of Bjørnavik (French: Fédération Nordique de Bjørnavik, Swedish: Nordisk Federation i Bjørnavik), is a self-proclaimed sovereign democracy located in Normandy, a geographical and cultural region of France, but is more commonly referred to as a micronation by external observers.

The federation capital and largest city is the Free City of Storskøger.

Bjørnavik is a free democratic unicameral federation mostly inspired by libertarianism and direct democracy. The state is called the Common.

Bjørnavik is mostly inspired by the Norse and Scandinavian culture but also by many other culture from human history all around the world. The main purpose of the federation is to protect nature from human’s predation especially within the federation’s borders.

The Nordic Federation of Bjørnavik is part of the Nordic Confederation as an observer.

The Nordic Federation of Bjørnavik is a peaceful, ecological, scientific, philantropic and anti-capitalist state which tends to produce only what it needs for its citizens to live well and no longer depend on fossil fuels. As a peaceful federation Bjørnavik is against the spread of firearms and guns are prohibited within the territory law.

The environment and all living beings protection and preservation is the raison d'être of the federation.

The federation do not consider the technical progress as a convincing answer to the actual environmental world crisis.

The national Motto reminds to every citizens that they are here for a short period of time and they must act thinking the nature will remains long after they will be gone as the Common will.

Bakunin's quote guide the international relationships : "We recognize the absolute right of every nation, large or small, for every people, weak or strong, for every province, for every commune, to complete autonomy, provided that its internal constitution is not a threat or a danger to the autonomy and freedom of neighboring countries"

The Jarldom was named after Baron Håkon II « Svartbjørn » (Black Bear) discovered it and there was a bear on the beach when he landed. He took this as a good omen from the Gods and decided to settle there with his people.

On the beach heights they found a cave where they spent the following night and in the morning they discovered it was the bear's cave. Baron Håkon II decided to founded the city of Hørsteinner - derivated from hár (high) and steinn (cave or rock dwelling) - and said that the city will be under the protection of the bear.

Having suffered and fled tyranny, Baron Håkon II decided to split the new land between him and his three most trusted men and made them co-regents. It was the first union of the 4 Bjørnavikan territories.

During the exploration of the land, they named the different place, mainly according to geographical features:

The Great Nordic Territories of Bjørnavik were found on 27 January 2021 after Baron Håkon Van Dhom lost all his confidence in the french government to protect his citizen’s rights.

The writing of the Constitution begins on 15 February 2021 but it appears that the name of the state was not in line with the government type desired by the citizens.

A referendum took place on 22 February 2021 to choose a new name. The Nordic Federation of Bjørnavik is finally chosen by consensus.

On 5 April 2021 the Constitution has been ratified by the Fölkthing and therefor begins a new era in the Federation.

The federal legislative power is vested by a parliament called the Fölkthing (People’s Assembly) and every adult citizen own a seat and a voice. The Fölkthing is oversees by the First Speaker, drawned by lot before each parliamentary session and for the length of the session.

The Council of Common is appointed by the Jarl-Protecteur to fulfil the six following Delegations duties :

Each member of the Council is called a Delegate.

The local's power are vested by Ländthings (Land’s Assembly) in every territory of the federation. Every Ländthing is overseen by an Aedile drawn by lot for a one-year term. The Ländthings manage local roads and public transport as well as the local school, local affairs and even local justice.

Each territory has its own local assembly the Ländthing to manage local affairs.

The Fölkthing and the Council of the Common sits in the Svartbjørnhùs (Black Bear's House) as is located the office of the Jarl-Protector and the First Delegate. The government building is located in the Free City of Storskøger.

The local judiciary is vested in each Ländthing.

The federal judiciary is vested in the Court of the Common chosen by the Fölkthing for a one-year term. It decides in the event of failure to grant a concession by the Ländthing.

As a peaceful and neutral state Bjørnavik is open to all foreign relationship through its Delegate of the Foreign Affairs.

The Nordic Federation of Bjørnavik has signed a treaty of alliance and mutual recognition with the following state:

The Nordic Federation of Bjørnavik is actually part of the following micronational organisations:

Was part of the Micronation Assembly since 10 March 2021 but withdrawed after an unanimous Fölkthing vote on 5 February 2022.

Bjørnavik is a peaceful and neutral micronation. There is no permanent military forces but every adult citizen undergone a military training and is a member of the reserve of the Citizen Self-defense Battalion. The Battalion is formed in case of conflict and led by an elected Lieutenant-General chosen among skilled officers.

As an anti-capitalism state Bjørnavik has an economy of the free, based on exchanges, like food-for-services or food-for-crafts exchanges.

Furthermore there is no industry on Bjørnavik and the state does not encourage it.

For now, there is no currency either. 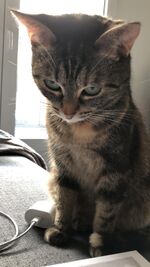 The Bjørnavikan cat is a species endemic to Bjørnavik. Likely to have easy contact with humans, it can sometimes be a little angry and scratch your skin until it bleeds. Big sleeper, it spends most of its time sleeping or washing itself. 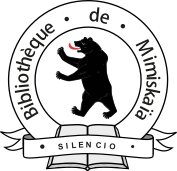 Mimiskaïa Library Blason and its motto 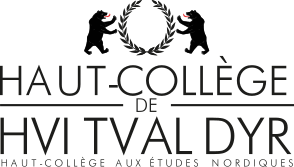 The only science center of Bjørnavik is the High-College of the Nordic Studies also called the High College of Hvitvaldyr. It is located in the Free City of Storskøger.

The main library is located in Hørsteinner and is called The Mimiskaïa Library.

Yule Festival takes place every year between 21 December and 25 December.

The national dish is the Nordic Salad composed of potatoes, red onions, smoked fish (herring or salmon) and a cream/mustard/vinegar sauce.

As the Scandinavian people Bjørnavikans drink a lot of coffee and this beverage was chosen as the national drink before beer and ginger wine.

There is no official religion in Bjørnavik but actually 33% of the population is Christian, 33% worship Norse gods and 33% is anismist.

The national sport is mountain biking. In fact, all the population uses bikes as their only means of transport.

Most Bjørnavikan houses do not have a kitchen. Meals are taken in the Fölkskáli (People's Hall) in the neighbourhood or village. Everyone brings what they can and in this way it is ensured that no one is short of food.

There are 6 honorific titles in the Nordic Federation of Bjørnavik to reward a citizen for his/her action for the Common, in a various areas.

Some people may be granted permission by the Common to wear an honorary title as a result of significant service to it. Such persons may choose to add Baron, Baroness or Honorable before their given names (e.g. Honorable Mimi Skaïa). This title does not confer any hierarchical or social superiority. These titles are granted unanimously by the Fölkthing or the Ländthing.