The Archduchy of Loringia (Czech: Arcivévodství lorynské) is a landlocked nation located in Central Europe, bordering only the Czech Republic and the Noble Republic of Lurk. Loringia used to be one of the Lurk's krajs until it was separated and joined Mercia, with the Lurkish president Alex White becoming Archduke of Loringia, under the regnal title of Lord Karl Friedrich von Ravensburg. Furthermore, Loringia is also in a state of condominium with the Noble Republic of Lurk, where both nations share traffic laws and roadway governance.

Lorynsko, or Loringia was named after the German state of Thüringen, which is known for its nature. Formerly, the Czech name of the archduchy was "Porynsko", which translates into land by the Ryn [river].

South Loringia hosts two rivers, Ryn and Nek. Nekker Lake, the largest lake of Lurk, can also be found here. A small forest is located near the lake. The area near the lake is protected by the Noble Republic of Lurk as the Nek River National Park and by the Czech Republic as a Nature Reserve. Lurk extends this protection to the entire Nek River area.

North Loringia is a region of fields and grasslands. It borders Lurk Hills to the West and Czech Republic to the East. Unlike the South, North Loringia has infrastructure of higher quality, with numerous asphalt paved roads and tracks for cyclists.

Current Archduchal symbol of the House of Ravensburg

Archduke is the monarch of Loringia. In the nobility hierarchy, this position is considered the highest. Currently, the Archduke does not have any limits or restrictions on his power. Since the foundation of Loringia, Karl Wilhelm Franz Friedrich von Ravensburg holds the position of the Archduke.

Currently, the landed Noble hierarchy is as follows: Archduke, Grand Duke, Duke, Count and Margrave. Each noble rank has specific power in the land they are given. Within Loringia, a noble can be a vassal of any other noble.

Seal of the National Diet of Loringia

The First Estate consists of both landed and unlanded nobles of Loringia.

The Third Estate represents cities and the bourgeoisie in the National Diet. Currently, as there are no cities in Loringia, this Estate is empty.

The Fourth Estate represents the rest of the population. They are elected through the entirety of Loringia.

Loringia is divided into Cities, Duchies, Margraviates and Unincorporated territories.

Duchies are by far the largest of the current subdivisions. There are currently two duchies, the Grand Duchy of Upper Loringia and the Duchy of Lower Loringia. Duchies are ruled by a Duke. Dukes are named by the Archduke of Lurk, and their titles are not hereditary. Duchies have a right of representation in the Fourth Estate and the First Estate.

Cities are subdivisions similar to the Duchies, however, they are completely democratic in nature. Cities have the right to form their own assemblies and elect own leaders, unlike in Duchies or Margraviates. Cities must have a founding charter. Currently, the only city is the City of Artifax Corporation. The right of representation to the Third Estate is guaranteed.

Margraivates are usually thin territories scattered along the border with the Czech Republic. They are supposed to be border buffer zones and as such no other territorial subdivision borders the Czech Republic. They are ruled either by a specific Margrave appointed by the Archduke or the Archduke himself. No citizens are expected to live there, the right of representation to the Fourth Estate is possible only by a proclamation of the Archduke and the Margrave.

The unincorporated territory is a designation applied to territories which are claimed by Loringia used to denote their temporary status within Loringia. Either they will get unclaimed by the Archduke, or they will be turned into one of the other subdivisions. They have no right of representation and they are directly controlled by the Archduke.

Loringia claims a variety of roads, ranging from dirt paths to paved asphalt roads. Loringia's roadway system is extensive, total length is estimated to be over 6 kilometers.[1] Nearly two kilometers of these roads are paved. Loringia's road classification system is the same as the one used in Lurk and the Coronese Confederation. Coincidentally it is also one of the main reasons Loringia is in a condominium with Lurk. 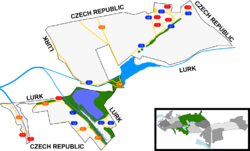