Podlurksko-Neksko, roughly translated as Underlurk-Nek, is the largest of the central cantons of Lurk. It is one of the most heavily visited cantons of Lurk, due to the presence of the Nek River, bridges and footpaths. It is best known for hosting the majority of the Nek River in Lurk and its natural beauty.

Nek River is the defining feature of Podlurksko-Neksko, and the Canton is partly named after it. The Saar stream mouths into the Nek River in the central part of the canton, as does the Loringian stream.

In the canton, the currently unnamed bridge, which also serves as a border crossing, can be found. 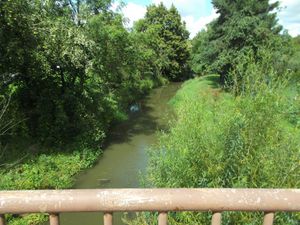 View of Nek from the bridge.

Podlurksko-Neksko was initially claimed in the year 2011, shortly after the establishment of the Lurk Republic. It was one of the factors that helped to decide the claims of the country and shape the inital culture of Lurk (especially through the Nek River symbolism). Initially an unnamed part of the subdivision of Lurk, it then was transformed into a part of the Lurk Hills county within the LurkSAR of the Lurk Federation. In March 2013 it was finally named Podlurksko-Neksko and became a Kraj within Lurk, acquiring its current flag and anthem.