The Alston Motorway (historically known as the Northern Motorway) is a motorway in Cambria, Sirocco. It links the provincial capital, Alston, to its northern suburbs and the northern end of the province. It is part of the A1. The highway is identified on signage and maps with the standard green and orange box with M1 in orange type.

The Alston Motorway starts in North Alston at the Northern Interchange, which it shares with the Rockport Highway. Initially it is a gravel road, but after seven metres becomes a fully concreted road. From here it is a smooth descent into Belmont, where it again becomes a gravel road at the Belmont Interchange. The motorway continues further southeast until it reaches its terminus at the intersection with Commonwealth Avenue and Hibiscus Street.

The Alston Motorway has one of the highest speed limits in Sirocco at 30 km/h for its entire length. 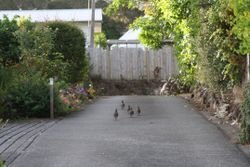 Quails on the M1 near North Alston in the early evening.