Voting in Koss is the process by which Kossian citizens make decisions about governance and elect the governor. Voting takes place within the Grand Assembly of Koss.

Koss's voting system is unique when compared to other Federations within St.Charlie. Koss practices direct democracy, in which any citizen may challenge any law at any time. In addition, in most cantons, all votes are cast using the internet due to the great disparity between citizens. 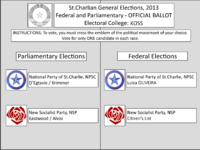 The ballots used for the St.Charlian Decision 2013

Voting can be done either through mail-in ballots or Internet votes.

Voting is not compulsory due to the lack of means to enforcement.

Usually, mail-in ballots are only used for referendums and Federal elections. In which a ballot is sent to each citizen, where they are completed and then they are sent back for manual counting. This method is usually used for the Cantons of Greater Crasager, Gallifrey, Peritia and Zenturick Alfa.

Most of the activity of the Grand Assembly takes place online. This is due to the great distance between citizens. Kossian citizens are sometimes divided by seas and oceans. For this reason, Koss uses an internet alternative in which Kossians vote using their computers or smartphones.

Koss currently has about 13 inhabitants; 11 are Kossian citizens who have the right to vote. All Kossians citizens aged 13 years or older have been allowed to vote at the federal and national level since the entrance of Koss in St. Charlie.