The League was established to attack heretical incursions into micronationalism, especially Protestantism. 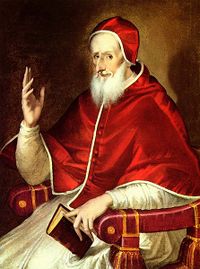 In A.D. 1571, to respond to the threats posed by the Ottoman Turkish invaders, His Holiness Pope Saint Pius V organized a loose defensive coalition of Catholic states - the Papal States, Spain, Naples and Sicily; the Republic of Venice, the Republic of Genoa, the Grand Duchy of Tuscany, the Duchies of Savoy, Parma and Urbino and the Knights of Malta. Together a large fleet was amassed to challenge the Ottoman navy's dominance of the Mediterranean.

On 7 October 1571, the fleet of the Holy League, under the direction of John of Austria, destroyed the Ottoman fleet at Lepanto, slaying many of the Ottoman armies and slaveholders, and freeing over 10,000 slaves. Subsequent alliances of Catholic states helped prevent the further expansion of Islam into Europe.

The Holy Empire of New Israel, inspired by the Holy League of 1571, assumed the name and the banner of the league of 1571 for a new Holy League to combat heretical threats to their national existence.