Anthea /ænθiːə/ or /ænθeɪə/, formally the Glorious Anthean Republic (Czech: Slavná Republika Anthea),[note 1] is a micronation in south-east England, though with territories across the world and an exclusively online political and social life. It is the self-declared nation-state of the MicroWiki community, which has existed since 2008, and it was founded on 1 February 2021 as the outcome of the 2021 attempt to create a community micronation, which started on 25 January. Anthea claims Kingley Vale in south-east England, along with a kaleidoscope of other territories across the world ceded from different nations in the MicroWiki sector.

Anthea has no website, flag, coat of arms or national seal, national animal or other national symbols, or time zone. The intention is that the community or the first government elected by the community will choose these features rather than a narrow planning board designing them. Unlike many other online-orientated micronations, it has no national Discord server, as MicroWiki@Discord and the other Discord servers used by the MicroWiki community are intended to be the venue for Anthean national life. 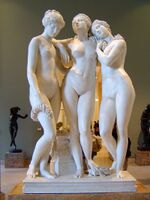 James Pradier's 1831 depiction of the Charites. Antheia is in the middle.

Ives Blackwood coined the name Anthea in December 2020 as an + the + a. It was originally meant to be a short name for a community micronation formally known as the 'Republic of Articles', referencing MicroWiki entries, playing on the additional meaning of the word 'article' as the collective term for the words a, an and the in English to create something that would sound like an actual country name. Konstantínos Hockenheim has interpreted Anthea as a variant of the actual word article, also referencing MicroWiki entries.

Anthea is also an English personal name from the Greek name Ἀνθεία (Antheia), from ᾰ̓́νθος (ánthos), meaning flower or blossom, or — unrelated to the personal name — brightness or brilliance. In Greek mythology, Ἀνθεία (Antheia) was an epithet for Hera, queen of the Gods and goddess of women, marriage, family and childbirth, and was also sometimes the name of one of the three Charites, in this context meaning 'blossoms'.

The full name of the republic is the Most Serene and Glorious Anthean Republic of the MicroWiki Community. Though abbreviated to "Glorious Anthean Republic", the full name actually refers to a "Republic of the MicroWiki Community" that is Anthean. Some macronations do the same thing and have names that use an adjective to describe the cultural character of the state, with the noun being a broader term for the land or nation, e.g. the Hashemite Kingdom of Jordan, Oriental Republic of Uruguay or the Bolivarian Republic of Venezuela. The appellation Most Serene Republic was used in mediaeval Europe (and modern San Marino) to emphasise the sovereignty of republics despite their not having monarchs, as historically serene meant supreme or royal. The adjective Glorious is particular to Anthea.

A graphic representing the Austenasian Civil War in The St.Charlian Observer

The history of the MicroWiki community before the republic was created is part of Anthean national history. The website was founded in 2005 but the community that evolved into what the Glorious Anthean Republic considers its nation can only be traced back as far as October 2008. In October 2008, Robert Lethler, Joe Foxon and Jacob Tierney joined the wiki, and the Grand Unified Micronational was founded in January 2009. In this early era, messages left on MicroWiki talk pages were the main venue for the community. Between August 2009 and mid-2010, Lethler and the GUM held hegemonic sway over the community, broken by the Organisation of Active Micronations being created in March 2010 and Lethler leaving in July 2010. In March and September 2010 were the Austenasian and Atlantis Civil Wars respectively, which were both major events in the community that established its negative view of micronational warfare as immature and destructive.

From late 2010 onwards, micronational Skype rooms replaced talk pages as the main venue of the community, and MicroWiki moved from Wikia to an independent domain. In November 2010, the admins controversially banned Sebastian Linden, dividing the community as one faction backed the admins and the other called for Linden to be unbanned and for the admins to be more accountable. Meanwhile, admin Aldrich Lucas became the dominant figure in the community. The OAM declined in influence and sparked controversy after it started branching into the Micras sector of interactive geofiction, which some denied was micronationalism. Linden was unbanned in July, and the GUM was secretly revived in August. Tensions flared up again in September with Yablokogate, when Lethler briefly returned, revealed that the GUM had been revived, and showed that Lucas had been plotting to take over the community for Yabloko.

Following Yablokogate, the OAM was dissolved in December 2011, and the GUM increased in power through 2012. At around this time, the community definitively decided interactive geofiction was not micronationalism, separating it from the Micras sector and representing the start of classical micropatriology. 2012 and 2013 were largely settled, characterised by formal diplomacy giving way to informal networking on Skype, other than at major events like PoliNation 2012 and the 2013 Intermicronational Summit. One exception was conflict over Bradley of Dullahan and Quentin I of Wyvern making alleged xenophobic remarks, and the 2012-13 GUM leadership scandal, when Dullahan and Yaroslav Mar were forced to resign over accusations of corruption and Crown Prince Jonathan became Acting GUM Chair. From early 2013 onwards, the Empire of Austenasia became the most powerful nation in the community, and in May 2014, Jonathan became site owner of the wiki.

William Soergel proposed the Denton Protocol in July 2014, leading to a backlash from right-wing members of the community, and over the next year or so, a distinct right-wing appeared in the community for the first time, with several micronationalists converting to Christianity or abandoning socialism. There were serious tensions between the left-wing and right-wing of the community and the left mostly moved from Skype to the MicroWiki forums. In addition, newer members were concentrated on the forums and could only enter the Skype rooms when they were invited by someone already-established, and there were tensions between them and older members. The GUM changed from an organisation to a formal chatroom in June 2015 and changed back in June 2016. In early and mid-2016 was the intermicronational economics boom of 2016. Tensions between the left and right and between the older and newer members of the community started to die down in late 2016 and early 2017, but these causes were briefly revived in mid-2017 by two intertwined controversies, the New Community and a diplomatic dispute between Austenasia and Delvera. Subsequently, activity in the community seriously declined, to the point where the MicroWiki forums were abandoned and sincere concerns were expressed that the community might die out.

There were brief experiments in micronational Discord servers from 2017 onwards while Skype declined, and in September 2018, the community moved from Skype to MicroWiki@Discord, which hugely swelled its numbers and restored activity. Initially, the GUM and the Old Guard retained their traditional hegemony, but from 2019 onwards a defined strand of New Guard politics came to be equally influential, establishing the Cupertino Alliance as a companion to the GUM. Governance of MicroWiki@Discord, concerns over its toxicity, and occasional bursts of anti-moderator sentiment culminated in a failed attempt by Jonathan in November 2020 to shut the server down, which was followed by it being spun off as a separate institution to MicroWiki with an independent moderation structure. Meanwhile, the traditional Old Guard — including some wiki admins — became inactive on MicroWiki@Discord or even left the server altogether, using the Micropolitan Club and Lounge instead.

Easterling announced that an election to a Convention Parliament would be held on 5 March and asked MP candidates to contact them. 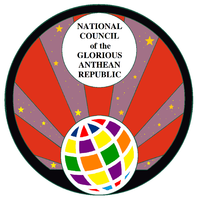 The Glorious Anthean Republic is a parliamentary, directorial republic with a fully written, uncodified constitution (though at present it only has one constitutional document, the First Provisions). The state comprises four primary institutions — Parliament, the National Council, the Ministry, and the High Court. Parliament is an elected legislature composed of MPs who represent constituencies, which are intended to represent organic social groups in the community, like the Fesmarian sector or The Fun Gang. The first panel of people that can command a majority in Parliament after a general election becomes the National Council, a cabinet of ministers that runs the executive and effectively acts as a collective head of state. The Ministry is the central government, composed of departments which are led by the ministers who sit on the National Council and staffed by politically-neutral civil servants. The High Court is the supreme court of law, responsible for interpreting the law and working out what the law actually is in the case of ambiguities.

Anthea has a tripartite separation of powers, where Parliament creates the law, the Ministry carries out the law and the High Court interprets the law. The National Council has both a legislative and an executive role — it is expected to propose bills to Parliament and it also leads the executive.

Following the declaration of independence, currently, the only law in Anthea is the First Provisions, which are part of the Underlaw and effectively serve as the initial constitution of the country. The First Provisions define Anthean law, establish its institutions, and lay out basic procedures for government. They will be formally adopted for a second time by the Convention Parliament elected on 5 February.

The First Provisions establish Parliament as the sole, unicameral legislature of the Glorious Anthean Republic, elected by the MicroWiki community.

A light-hearted provisional logo for the Boundaries Commission. The castle refers to the community being 'full of guards' (e.g. the Old Guard).

Elections to Parliament are held once every four months. The community is divided into constituencies, which between them are entitled to send forty MPs to Parliament, and the constituencies are supposed to be equivalent to natural sub-groups that already exist in the community. There are two types of constituency, borough and county. Borough constituencies refer to specific groups, such as "TOES" or "Fesmar with Belgica" (which aims to capture the whole Fesmarian sector), and tend to only have one or two MPs. In contrast, county constituencies are broad catch-alls that account for people who are not included in any borough constituency, and at present, there are only two, "MicroWiki Discord" (able to elect 28 MPs) and "Micropolitan" (able to elect 4 MPs). The First Provisions establish a Boundaries Commission, which determines the constituencies, and will also be responsible for running the first two elections on 5 February and 5 March 2021. The current Boundaries Commissioner is David Easterling. 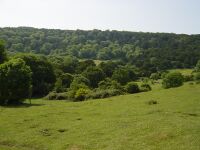 The view into Anthea from close to the British border.

Anthea covers around five hundred acres (0.78 sq mi), in addition to the territories ceded to it from other MicroWiki nations. Its main territory, Kingley Vale, is entirely surrounded by the United Kingdom, approximately nine miles from the town of Chichester, Sussex in the south-east of England. Anthea has one of the world's only surviving yew forests (which also has beech trees, which are fairly common). The community micronation claims a yew and beech forest in reference to the Hilaire Belloc poem My Own Country, which superficially appears to reference micronationalism and states that "The trees that grow in my own country / Are the beech tree and the yew".

A flag contest will run from 5 February to 5 March 2021 to choose a national flag for the Glorious Anthean Republic.