The Armed Forces of Kapreburg (AFOK) are the national military of the Empire of Kapreburg. 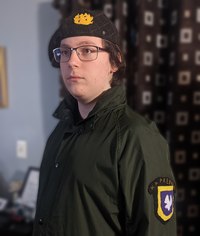 Jackson I in a typical KRA uniform

The AFOK is commanded by the sovereign and head of state, Jackson I as Commander-in-Chief, who often is styled as "General Jackson I".

The Armed Forces of Kapreburg wear uniforms which take influence from many other militaries, including the United Kingdom, United States, Rhodesia, France, and Australia.