The Battles of Whynofly or Kapresh occupation of Whynofly began on 8 May 2021, when Kapresh forces invaded the Weg territory of Whynofly, and F.C.O Weiler surrendered after being captured by the Royal Kenton Rifles.

On 5 May 2021, Jackson I introduced the idea of joining the Great Des Plaines Valley War to the House of Commons which was met with mixed reactions. On 6 May Jackson I officially announced that Kapreburg would be entering the war. Jackson talked with Edward Oaches, who then told Jackson about the planned Rodentian invasion of Abierta and Whynofly which was planned to occur on 8 May. Jackson told Oaches that he would attend with Matthew Hughes. On 7 May, Oaches informed Jackson that no Rodentian or Weimar forces would show up to the battle. This led Jackson to become anxious that Kapreburg would lose the battle, come 8 May.

Jackson I and Matthew Hughes showed up at Loves Peak at around 2:00 p.m. on 8 May 2021, expecting Weg soldiers to already be there, and suspecting themselves to be late, the two entered the woods in an attempt to find the Wegs. Jackson would repeatedly shout, to make themselves known and inform the Wegs that they would not shoot until everything was established. At around 2:50 p.m. Aidan McGrath told Jackson through Discord to go back to Loves Peak. Upon returning to Loves Peak, F.C.O. Weiler was met by Kapresh forces, and they agreed to enter the forest for the battle. 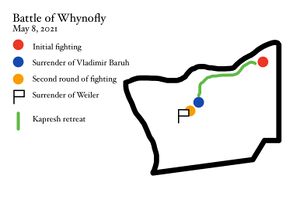 A map of the Battle of Whynofly

Around 3:00 p.m. fighting began. Both units relatively stayed in the same place, until Matthew Hughes saw Weg forces moving south. Hughes and Jackson I attempted to quietly sneak around to ambush them from the side. At one point, Hughes and Jackson found the bags of the Weg soldiers and thought about stealing them, but disregarded the idea. Weg forces would then begin shooting at the Kapresh forces, causing the Kapresh to leave the area. The Kapresh walked back into the forest for a little bit, then decided to come back to where the battle had started. While walking down Schiller Brook, Weg forces had spotted Hughes and Jackson. The Kapresh forces then fled back to Interior, called Fort James by the Kapresh despite multiple sources citing the area as the town of Interior. It was here that Vladimir Baruh surrendered to Kapresh forces. The three stayed in Fort James, until Hughes and Jackson told Baruh to go back to F.C.O. Weiler and tell him that the Kapresh wanted to surrender. They then had Baruh lead Weiler down the trail in the forest. Jackson and Hughes then hid out in Fort James, and once Weiler came by, they began shooting. Baruh ran over to Fort James and attempted to get his gun to work again, as it had broken earlier. Weiler hid behind trees and occasionally shot back. Jackson I would shout, trying to convince Weiler to surrender. Eventually Weiler had dropped his gun and put his hands up, then was held at gunpoint by Matthew Hughes, and on the ground Weiler surrendered the battle, and ceded Whynofly to Kapreburg. The Wegmat Marines cited the surrender because a loss of ammunition.