Libertia, officially the Duchy of Libertia (Latin: Ducatus Libertia, Portuguese: Ducado de Libertia, Italian: Ducato di Libertia), is a landlocked micronation within Madeira Island, Portugal. It is a constituent state of the Karno-Ruthenian Empire since 1 February 2015. It consists of a two floor house, an annexed terrane and a garden divided into three main provinces, Grancasa, Arpuro, Vitruvio and a celestial colony on the moon, La Hire. Libertia has a total population of 49 as of May 2016, and claims an approximate territory of 2450 m² (26156.30 ft²).

Before it's formation, Libertia used to be the princely residence of Lomellina under the name Lomellina Consolato wich was kept in secret from it's citizens, later becoming Libertia's capital city after the events of the Lomellinian Revolt orchestrated by the Lomellinian Aristocracy to dethrone the former Prince of Lomellina, D. Guilherme da Lomellina e Berenguer. Libertia is home to the Libertian Archives, an executive agency of the Government of Ruthenia and the most reliable source in Ruthenian documentation and micronational ex-libris. 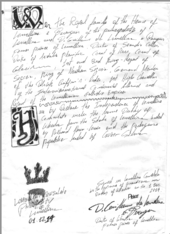 The original Declaration of Independence of Libertia.

Formation and the Lomellinian Revolt

In the 20 November 2014, the Lomellinian Aristocracy proposed a government change in which the High Chanceller Richard Abreo-Louis had complete ruling power over the aristocracy members, in a decision that did not pleased D. Guilheme I, the Prince of Lomellina, since the prince had gave great autonomy for aristocracy.

His denial caused the aristocracy to protest and started an anti-absolutist campaign against the prince on the 26 November. The same day, the event now called "Lomellinian Revolt" began, and Richard Abreo-Louis was crowned as the constitutional successor of Prince Guilherme and his reign lasted for only 3 days. On the 1 December, Guilherme I was officially overthrowed by Richard Abreo-Louis after the capture of Castello di Valle, Lomellina's capital city. After 4 December, Richard turned the nation into a State in which the only territorial posession was Castello di Valle, thus creating the State of Lomellina.

As for the dethroned D. Guilherme I, he exiled to the Autonomous Kingdom of the Savage Islands, which was formed by his cousin, King Francisco de Moniz II. After a week in exile, D. Guilherme took the conclusion that he still held ruling power in Lomellina Consolato and founded the Duchy of Libertia within the city along with his Ducal Family.

Union with the Kingdom of Ruthenia

On the 30 January 2015, D. Guilherme established contact with the King Oscar of Ruthenia, with the idea of annexing Libertia into his project, the Kingdom of Ruthenia, a request that was instantly accepted, since the two were old friends. King Oscar elected Guilherme as Chancellor of Ruthenia and a place his family between the other Ruthenian noble houses by Royal Decree nº033 as of 1 February 2015 that states: "I grant autonomy to the Dukes of Libertia to rule the Duchy from which it comes from that in full accord and harmony with the Government of Ruthenia." (Article 5) and "I nominate His Royal Highness the Duke of Libertia, for the position of Chancellor of Ruthenia, whose functions shall be established by the Constitutional text." (Article 6).

Since then the Duchy of Libertia has been one of the most important cultural centres of Ruthenia and home of the Libertian Archives wich gave Ruthenia and all it's vassal states the most reliable source in Ruthenian documentation and micronational ex-libris as well as several official documents of the now sissolved Principality of Lomellina. 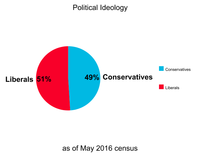 Political ideology as of May 2016

The Ruthenian Crown (commonly refered as Royal Family) is the maximum authority in the Kingdom of Ruthenia and all it's annexations, including the Duchy of Libertia. The Ducal Family are the heads of government in Libertia, they can aprove and enact new laws within Libertian borders with the voting majority of the Aristocracy. The Vitruvian Council is a legislative organization that serves as the head of the Libertian Regional Government formed by five individuals appointed by aristocratic elections. The Provincial Marquesses are representative figures in each province or colony under the protection or within the borders of Libertia and the Aristocracy are a group of high ranked citizens of Libertia, they act as a sort of congress for the Libertian government alongside the Ducal Family.

The Aristocratic offices are a group of legislative and nobility divisions in the libertian aristocracy. The strict hierarchy of the libertian government divides the executive branch into one office while the rest of the legislative power is divided into four seperate groups:

The forerign affairs in Libertia are administrated by the Ruthenian Ministry of Foreign Affairs headed by Yuri, Count de Faria and King Oscar of Ruthenia. Kingdom of Acrin was the first nation to recognize Ruthenia, followed by the German Reich of Mednyat (later known as the Principality of Pripyat') and the People's Republic of Hashima. On 22 November, mutual recognition was also established with the Kingdom of Wiltogo. The next day, the Convanese Republic also recognised Ruthenia.

Ruthenia established itself as a friendly micronation towards others, with mutual recognition treaties, formal relations, and alliances. The main goal of Ruthenia's foreign policy is to contribute to peace and stability in the intermicronational community.

The military is highy influenced by chilvalric and military orders, most of them originated in the Principality of Lomellina. Chivalric Orders are groups or committees with various grades or decorations in wich the Duke of Libertia can award foreigners or citizens with good national status to the Kingdom of Ruthenia such as allies or national friends. Miltary orders are groups of military knights that participate as a fraternity in wars or conflicts. Most of the Lomellinian Army branch of the Lomellinian Armed Forces were members of a military order of some sort.

Nowadays there are four main orders in Libertia:

Libertia consists of a two floor 150m² house, a 300 m² terrane and a 1980 m² garden divided into three main provinces, Grancasa, Arpuro and Vitruvio and a celestial colony on the moon, La Hire Colony. Libertia claims an approximate territory of 2430 m² (26156.30 ft²). 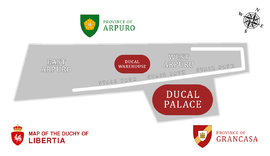 The Province of Grancasa is the capital city in the Duchy of Libertia. Most of the province's area is occupied by the Ducal Palace of Lomellina e Berenguer where the ducal family resides and work as the government body. The Province of Arpuro is a 300 m2 ground full of fruit trees wich are the main and only economic profit in Libertia. At the middle there is the Ducal Warehouse where the libertian family Lomellina-Berenguer stores it's older posessions. The Province of Vitruvio is the biggest division in Libertia and also the only touristic center. Vitruvio is the most vegetated area and the most busy. The La Hire Colony is the only libertian colony and ruthenia's extraterrestrial posession. La Hire is a solitary lunar mountain in the western Mare Imbrium. It is located to the northeast of the crater Euler, and to the west-northwest of Lambert. 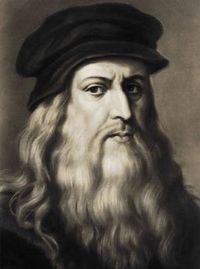 Libertia's citizens have three main goals, Discover, since the beginning, the libertian ancestors dedicated their lives into discovering new lands and new ways of living, libertians follow their actions into discovering new ways to improve it's citizen's lifes, Create, the best works of art always inspired the best minds of mankind into re-writting history as we know today, libertians create those inspiring pieces to allow tehir citizens to improve and Preserve, the world's biggest archives helped the people understand their ancestors into improving what was already done, libertians preserve that information, allowing the common citizen to learn more.

Libertians, mainly grancasian people practice somekind of artform wich is one of the greater values of the duchy, the ducal family is often seen painting, composing, decorating and even writing pieces of art. The duke himself describes himself as a polymath, a person whose expertise spans a significant number of different subject areas.

The national food of Libertia is the Lazanha de Peixe (English: Fish Lasagna) mixing the Lasagna from the italian culture and the fish element from the portuguese culture it's one of the most cherished dishes in Grancasa and is often the mais course in celebratory days, mainly christmas and court dinners. Other traditional dishes are Bacalhau (Cod Fish), Canelones (Cannelloni) and all types of pasta and sauces.

The Ruthenian Constitution of 2015 guarantees freedom of religion, though having an official religion (Deism), most of the citizens are Catholic Christians with only the exception of the duke, the duke's brother and the duchess. This choice was made by the founder and prince of Lomellina bringing the genovese ideologies from the italian Renaissance wich many geniouses adopted during their lifetime. Following this, Leonardo da Vinci was made a kind of "patron saint" of Lomellina and Libertia by the duke's great admiration for him.

A wide variety of nobles while following the christian church, follow and study some paganism cults and mythologies. Rickard de Abbrant Luiz, the head of the Countdom in the libertian aristocracy, is a great follower of the Egyptian mythology and studied Egyptology for four years. Other nobles such as Lorenzo Di Nuna Baptista, Viscount of West-Arpuro, studied Nordic Mythology and Micheal Antoine Di Souza, Baron Di Souza studied Japanese mythology and Buddist theologies, living in Japan for almost 2 years from 2009 to 2011. 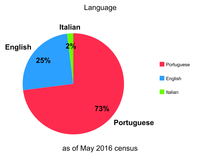 In everyday use, Portuguese is used by the majority of the subjects. In Court, the official language while still the Portuguese, the English and French has also regular use, especially by the government and it is the only language used by the Ministry of Foreign Affairs of Ruthenia.

English is the official language after the referendum to decide which national language would be adopted by Ruthenia. Lusophones and Anglophones had split the ruthenian government, disputing for power, with the King favoring one against the other. The plebiscite ended with the victory of the supporters of the English language. With Portuguese limited to being the language of the royal court, the Lusophones began an exodus from Ruthenia. The Anglophones, led by the Duke of Erdene, tried to incite rebellion, later being punished.

Literature in Libertia started in early 2015, when it became popular to write occultist tales and horror stories. Since Libertia became part of the Kingdom of Ruthenia works about the libertian mythos have been written as well.

Common examples of occultist literature include the tales Queda (The Fall), Porta do Vazio Infinito (Door of the Infinite Abyss), Herdeiro dos Anjos (Heir of the Angels), Páginas de Palanzo (The Palanzo Pages)and many others by the novellist and occultist writter A. Heartless.

The official Coat of Arms.

The Libertian Coat of Arms was designed by D. Guilherme da Lomellina e Berenguer on 22 March 2015. It consists of an Or helm wearing the ducal crown of Libertia, an Argent/Or mantle and two Or sceptres bearing a christian hand and a fleur-de-lis. At the center we have a Gules Swiss-style shield representing an Argent Rooster supporting two Gules Dragons with Or tongues.

The National Anthem is a part of the symphony "Carmen - Overture" composed by Georges Bizet. This piece of musical art was introduced on 3 March 1875 in Opéra-Comique, Paris and implemented as the Libertian Anthem on 11 January 2015. 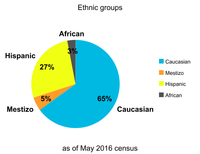 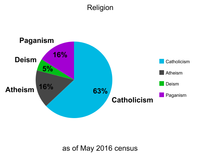