From MicroWiki, the free micronational encyclopædia
(Redirected from Flags and symbols of Karnia-Ruthenia)
Jump to navigation Jump to search

The flag of the Karno-Ruthenian Empire consist of seven horizontal stripes in red and white, interspersed and should be the first and last stripe red. To use of State, the National Flag will have the Ruthenian Eagle at its center. The tricolor of orange, black and white flag created in 2014 for the Kingdom of Ruthenia still a important symbol and is used sometimes.

Meaning of the National and State Flag 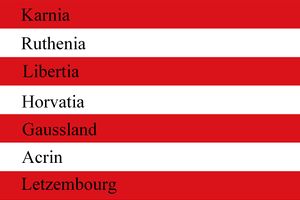 The explained stripes of the Imperial Flag.

During the transition from Kingdom to Empire, the search for a particular identity for Karnia-Ruthenia and especially to their national symbols, was observed and widely studied. The idea would be to invoke the characteristics and the celebrated culture of the micronation while pay homage to the founder of micronation, the Emperor-King Oscar. Observance of the white and red were present in almost all the flags of the states of the Empire start a search for styles involving these colors. With genealogical studies pointing to a connection between the Imperial and Royal House with the Árpád Dynasty, the choice of the flag was facilitated and is very similar to "Árpád stripes", except for having a strip less.

However, the flag has a very different meaning of the Hungarian flag. As pointed out by the government on 26 May 2016,[1] each stripe of the flag represent one of the states of the Empire at the time of its foundation, in the following order: Karnia, Ruthenia, Libertia, Horvatia, Gaussland, Acrin and Letzembourg. For use of state, the flag is added by the Imperial Eagle in its center.

Meaning of the Great Coat of Arms 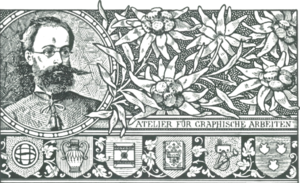 Portrait of Hugo Gerard Ströhl (1851–1919), the famous Austrian heraldist and main influence for the Karno-Ruthenian armorial.

The National Coat of Arms have three versions, all with equal and concurrent use, with the opportunity to indicate the most appropriate time for the use. The main coat of arms of the Empire will be based on the work of Hugo Gerhard Ströhl: the “Ruthenian Eagle” or “Imperial Eagle”, a selfstanding double-headed eagle sable, armed and crowned or, holding a sceptre and sword in dexter claw and an orb in sinister claw, all proper, beneath the Ruthenian Imperial Crown proper stringed azure; on its breast an escutcheon surrounded by the Collar of the Order of the Edelweiss, bearing tierced per pale: Or, a lion rampant sable (House of Thomaz-Rocha), the Árpad stripes - four Argent and four Gules stripes (House of Árpad), Argent double cross on Gules base, situated inside a small Or crown, the crown is placed on the middle heap of three Vert hills (House of Goëtzën). On the wings and on the tail are arranged coat of arms of the lands, counterclockwise: Bessabia, Libertia, Escandia, Gaussland, St. Stephen, the coat of arms of the House of Goëtzën, Persenburg, St. Peter and St. Paul, Karnia, Acrin and Ruthenia.