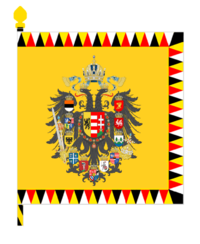 Cerimonial Banner for the Imperial and Royal Army.

The Imperial and Royal Army was founded on 26 November 2014 as the Royal Army of Ruthenia, few days after the foundation of the Kingdom of Ruthenia. The army was originally, and still have very much of its primary function, intended to be a defensive force to protect the micronation. During this period, Ruthenia avoided major conflicts between 2014 and 2015 but engaged in a number of minor actions supported by the military, for example the 2015 Ruthenian coup d'état attempt and the Overthrow of the Badakistani monarchy.

Following the signature of the Karno-Ruthenian Compromise of 2016, the armed forces were readapted and entire hierarchy, nomenclature and training program were reconsidered. They use the Austro-Hungarian model to make patents and the army hierarchy. With the formation of a better organized General Staff of the Armed Forces, there was also a profound change in the attitude of the military, who have adopted a more interventionist attitude towards the military policies of the Empire. The best example of this is intervention in the Lundener Civil War.

Karnia-Ruthenia is divided into army inspectorates, each of which oversaw a territorial army once the states which made up the Empire contributed their armies and is responsible for maintaining certain units to be put at the disposal of the Empire in case of conflict. The member states subordinate their armies to the Imperial and Royal Army in time of war, giving total control over them.