The 2018 MOF Prep Games was the first edition of the MOF Games. The MOF has all events online so more people will compete. In the games, three events were played and three national titles are given out.

There were three events in the 2018 MOF Prep Games. It also included three National Titles.

The Tic Tac Toe events took place on a Google Drawing hosted by Posaf. The Tic Tac Toe was played on a classic three-by-three board. If two ties happened in the Semi-Finals the board would have expanded to a four-by-four board but winning by three in a row. If a tie happened in the final after two rounds both finalists would have received gold. Each game was best two out of three.

The final of the event was a tie so Justin Donamana (POS), and Nicolas Millan (MNG) were both awarded gold in the Tic Tac Toe final. 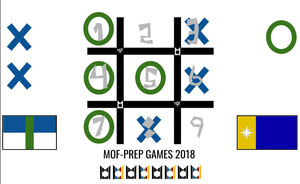 The Checkers event at the 2018 MOF Games were held on a Google Drawing. It was on a six by six with each player getting 6 pieces. The classic rules of checkers applied for every game.

The Agar.io Party games were being held at a private party on Agar.io. There was one game and it was ranked on by who stays in the game the longest. Also, there was only a final for the games consisting of five cy-letes.

Three National titles were given out based on their appearance. The three titles included: Best Flag, Best Motto, and Best Coat of Arms. On February 12 the Best National Anthem was switched to Best Coat of Arms after only Andany had a national anthem. Once a nation sends one athlete to the games they are automatically qualified for the three titles.

The Best Flag award was given out on 17 February as the first award given out. The judges looked for four main points by judging the flags, distortion, symmetry, noticeable, and colors. The distortion is based on if you zoom in on the flag, it won't be distorted and look out of place.

The Best Motto award was given out on February 18. It was judged on how well the motto represents the micronation and its people. There was a tie in the voting so Andany and Posaf shared the Bronze Medal.

The Official event calendar of the 2018 MOF Games

Six micronations competed in the Prep Games. There were seven available slots open but was changed to six. The reason for the change was so there was an open for Independent Micronational Cy-athletes (IMC).

On September 20, 2018, the Principality of Andany was revoked of all its Medals earned by its cyleats due to the revel of Andany being a scam.