The flag of Urabba Parks

(listen)) URE-a-bə pahrks), officially Urabba Parks Proprietary Limited, is an Australian micronation with the overarching purpose "to advance humanity and the environment together" through charitable democracy. Urabba Parks was incorporated on 3 July 2012, and established itself as a 'non-state jurisdiction' with the adoption of the current Constitution on 5 March 2021. Having a permanent territory of 1,310 square metres, Urabba Parks is affiliated with the Landcare movement and participates in the micronational community as a fully autonomous and de facto sovereign Imvrassian Hegemony.

Places associated with Urabba Parks have been inhabited by Indigenous Australians for approximately 65,000 years. Melbourne and Rankins Springs were settled by European Australians in the mid-19th century, and the history of both localities have been intertwined with the history of Urabba Parks. It was in Melbourne, a large city with a highly educated population, where the concept of charitable democracy was developed along with the Constitution of Urabba Parks. The rural and undeveloped state of Rankins Springs was what led to the founding Enactor Danny Racovolis purchasing the namesake territory of Urabba in 2011.

Politically, Urabba Parks is a federal parliamentary constitutional monarchy, comprising a virtual locale operated out of Melbourne and a territorial jurisdictional division at Urabba in Rankins Springs. There is provision for the admission of new regions and territories, being jurisdictional divisions with their own territory governance arrangements within the federal system. Subject to the legislative power of the Corporate Parliament, jurisdictional divisions are responsible for the affairs of Urabba Parks falling within the territory of their division, whether it be environmental protection activities on third-party properties or the governance of properties principally occupied by Urabba Parks falling in the division.

More about Urabba Parks, its history and culture
Refresh with new selections below (purge)
Portal:Urabba Parks/box-header

Featured articles are displayed here, which represent some of the best content on English Wikipedia. 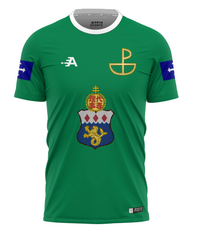 Urabba Parks FC kit
Sport in Urabba Parks generally takes the form of participation in fantasy leagues and sports administration. The micronation participates in intermicronational sporting competitions in its own right, and currently has an association football team and is member of the Micronationalist Martial Arts Association. (Full article...)

Entries here consist of Good and Featured articles, which meet a core set of high editorial standards.
Aggelos of Imvrassia (born 1 September 1981) is the current Emperor of Imvrassia and Head of the Imperial House of Imvrassia. His Majesty has founded Imvrassia on 11 May 2011 as its sovereign Prince. His Majesty was also Hegemon of the League of Hellenistic Micronations until 5 November 2016 and Emperor of Orfalia until 1 December 2016 when he abdicated. He returned as Emperor of Imvrassia on 25 December 2020 after Empress Aikaterini's decision. Aggelos is considered by his friends that he is one of the most famous Greek micronationalists. (Full article...)

Consider joining WikiProject Urabba Parks, a WikiProject dedicated to improving Wikipedia's coverage of topics related to Urabba Parks. The project page and its subpages contain suggestions on formatting and style of articles, which can be discussed at the project's notice board. To participate, simply add your name to the project members page.