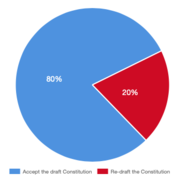 On the 25th of October, HM Queen Catherine I and the Privy Parliament released a draft constitution for public consultation. The constitution "...is 10 pages long, contains 45 Articles and details the rights and duties of all Citizens within the Kingdom; as well as the duties of the Kingdom to its Citizens".[2]

The Privy Parliament put the draft constitution to a full referendum, to determine whether to adopt the draft as the Kohlandian Constitution, or to re-draft it again. The Referendum ended at 12:01PM on Monday 4 November 2019,[2] with a 100% turnout recorded for the vote. 80% of citizens voted to accept the constitution; which became law as a result of the referendum at 1PM on 4 November 2019.[1]