The Parliament of the Kingdom of Kohlandia is the law-making arm of the Kohlandian Government. It is a unicameral legislature composed of all eligible adult Kohlandian citizens. Parliament is presided over by The Crown, administered by the Speaker of the House, lead by the Leader of the House and run by the Prime Minister. 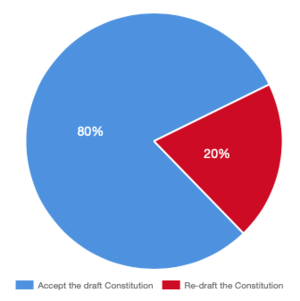 Results of the Kohlandian Referendum on the Constitution

On 1 September 2019, two days after the founding of Kohlandia, HM Queen Catherine I gathered her closest advisors to form the Privy Parliament. This small parliamentary body was established to identify which legislation was most important for the creation of a working legal system and the establishment of Kohlandian culture; and also to draft the first Constitution. The Privy Parliament agreed the text of this Constitution, passed two laws (one integrating existing United Kingdom law into Kohlandia's legal system; and one establishing the Honours system for Kohlandian culture) and completed work on the Constitution by 25 October 2019.[2]

The Privy Parliament then completed its objectives by submitting the Constitution to the people for a referendum. The Referendum was open to all citizens of Kohlandia and voting was possible from 25 October 2019 to 12:01PM on 04 November 2019. After this time, the votes were verified, tallied and the result announced. There was a 100% turnout and an 80% vote in favour of accepting the Constitution into law. When the result was announced, HM the Queen disbanded the Privy Parliament in favour of the full Parliament as defined in the new Constitution.[3]

The Kohlandian Parliament was established by the Constitution on 4 November 2019 as the sum total of all eligible adult Kohlandian citizens, who may table legislation and vote on legislation as and when they see fit. All votes are required by the Constitution to take place via secret ballot, although citizens are not restricted from revealing how they voted (or that they chose not to vote) on any particular topic.

The Kohlandian Parliament has the authority to pass legislation, in the form of Acts of Parliament; which it must do by secret ballots. Legislation is introduced to Parliament as a Bill, which is then debated for a period of time before reaching a vote. If the Bill is voted for by a simple majority, it will then pass to a second reading where any issues with the Bill that citizens may have can be debated.

Amendments to the Bill can be tabled to address the issues raised by citizens during the second reading debates. Each Amendment must be voted on in turn and, if passed by a simple majority, become part of the Amended Bill. Once all Amendments have been voted on, the Bill is placed before the Parliament for a third reading in its amended form. The Bill is then voted on again and if it receives a simple majority in favour, it passes on to The Crown for Royal Assent.

Royal Assent is not a guaranteed process and the Monarch has the power to veto a Bill at the assent stage. If the Bill receives Royal Assent, it becomes an Act of Parliament and is therefore law in Kohlandia.

If a Bill is vetoed, it returns to the legislature and cannot be voted on again for a year. The Bill may then be re-introduced to Parliament and go through the first, second and third reading stages again. If Parliament then votes in favour of the Bill at third reading by a supermajority of two-thirds of the votes cast, the Bill automatically becomes an Act of Parliament without the need for Royal Assent.

Parliament is composed of all eligible adult Kohlandian citizens, including the Monarch and other members of the Royal Family. Each Member of Parliament has a vote of equal weight; and each Member of Parliament may introduce legislation, providing the schedule set by the Prime Minister and Speaker of the House is adhered to; for the purposes of a well-structured series of debates and votes.

Votes are by secret ballot; although the Constitution demands that any Member of Parliament must not face detriment for revealing how they voted on any legislation, should they choose to do so.

Parliament has the power to legislate on all aspects of life and the legal system within Kohlandia, including the ability to alter the Constitution. Most legislation may be passed by a simple majority, followed by Royal Assent, but any alterations to the Constitution can only be passed with a supermajority at the third reading stage.

The Crown reserves the right, under the Constitution, to veto any and all legislation passed to it, unless that legislation has already been vetoed. Where legislation has previously been vetoed, royal assent is not required if the reintroduced Bill has received a supermajority on third reading.

The Constitution states that a person is eligible to sit as a Member of Parliament if they are at least 18 years old and not subject to disbarment due to criminal or civil sanction. Members of the Judiciary are also barred from sitting in Parliament.

Leader of the House

The Leader of the House is a mostly ceremonial role in Parliament. The Leader is elected by the Members of Parliament for a period of one year; and may be elected for as many periods as they wish to take on the role.