Honours in Kohlandia are typically bestowed by the Crown on Catherine Day; the annual holiday celebrating the birth of the nation's founder, Queen Catherine.[1] Honours are typically honorary titles granted to notable members of Kohlandian society, or foreign nationals who have done something of importance to Kohlandia.

There are several orders of title and honour that can be bestowed upon a person in Kohlandian society, from the Order of Kohlandian Excellence (OKE) to a title of nobility; although most recipients of an honour are granted the OKE or a Knighthood. It is possible for non-Kohlandian citizens to receive non-noble titles and Knighthoods as well. 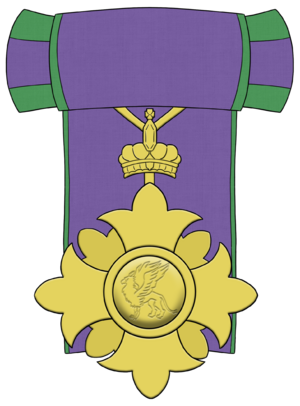 Design of the KCOG medal

The most common forms of Kohlandian honours that are bestowed are, in ascending order of prominence:[1]

The main honours are granted once a year, on Catherine Day, and only to people who "have demonstrated the highest level of excellence in their lives".[2] The level of the honour granted is in relation to the strength of feeling regarding the actions of the recipient.

The Kohlandian Parliament may award Honorary Citizenship at any time, under the Honours Act 2019, to any person who is not a Kohlandian Citizen; via a simple majority vote. This honour demonstrates the strength of feeling of the people of Kohlandia regarding the life and works of the recipient.

There have been relatively few recipients of Kohlandian honours since their inauguration. The first recipient was HIM Emperor Jonathan I, Emperor of Austenasia, who received the Knight Commander of the Order of the Gryphon from the inaugural Catherine Day honour roll, in September 2019.[2]

Any Kohlandian citizen may nominate a potential recipient for an honour; by contacting the Kohlandian Government with details of the nominee and the reason or reasons why they are worthy of an honour. It is also permissible to contact the Crown directly with this information, although it is recommended that the initial nomination be made via the Government. Kohlandians are discouraged from nominating themselves, as it is seen as bad form.

The honours process is not automatic upon receipt of a nomination - people don't just receive an honour because someone said they should. Each nomination is carefully vetted for accuracy and to determine whether the nominee has met the high standards for an honour recipient. If they have, a decision will be made about what level of honour their actions merit.

The final list of nominees is compiled by the Prime Minister, then submitted to the Crown for their approval. Both the Prime Minister and the Monarch have the right to veto any nominee prior to the publication of the final nominee list. This list is usually published a few days before Catherine Day; although the recipients themselves may have been contacted earlier than this.