The National Gallery is a separate entity to the National Library, which houses the Kohlandian book and music archives.

The Art Gallery houses a mixture of original paintings, prints, models, and sculptures; from both established and newcomer artists from around the world. It is split across several levels of the museum and displays many pieces prominently, as well as storing others in its archives. Artworks are swapped out on a semi-regular basis, to allow visitors to enjoy different pieces on subsequent visits.

Notable pieces held at the gallery include a range of originals by painter John Wigston; plus several prints from comic artists such as Mike Krahulik. 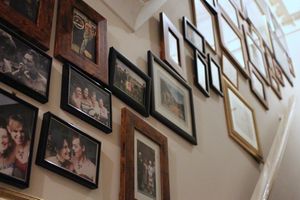 A staircase in the Kohlandian National Art Gallery, depicting several photographs from the royal wedding of Queen Catherine I to Empress Jennifer I

The main focus of the National Gallery is the portrait gallery; which is displayed primarily on the main staircase. This gallery depicts portraits and photographs of four generations of the Kohlandian Royal Family, as we all other famous figures from around the world.

The Kohlandian Film Archive stores copies of all original films created in Kohlandia, as well as all films created in the area now occupied by Kohlandia but filmed before the founding of the nation. It also houses a vast collection of film and television shows from around the world. The collection is housed across several floors of the museum and prominent films are shown regularly.

The precise number of film and television shows stored in the Film Archive is unknown at this time, as cataloguing the collection is still ongoing. Notable items in the collection include all available episodes of Star Trek and Doctor Who; plus a selection of low-print run and difficult-to-find films such as Jesus Christ: Vampire Hunter, Browncoats Redemption, and The Call of Cthulhu.

Like the Film Archive, the precise size of the Video Game Archive is difficult to state because the collection has yet to be fully catalogued; although conservative estimates put the archive at over 3000 exhibits. The archive is one of Kohlandia's most prominent collections and exhibits are regularly made available for visitors to both view and try out.

The archive covers the entire history of video games, from their console origins in the 1970s through to the modern day. Notable systems archived in the collection include a UK "Grandstand" badged version of the Fairchild Channel F, a Yamaha CX5M MSX computer, and a selection of difficult-to-find handheld LCD games.

A number of rare and hard-to-find games are housed in the archive, although access to these titles is restricted to prior appointments only for security reasons. Notable entries in the archive include Rule of Rose on PlayStation 2; the only known copy of text adventure Troll for the Amstrad CPC; and several development versions of games for the ZX Spectrum, Commodore 64 and Amstrad CPC.

The numismatic archive is a small collection of currency, both notes and coins, from around the world. The archive is stored in a safe in an undisclosed part of the museum and may be viewed strictly by prior agreement.

The collection includes notes and coins from several countries that no longer exist; as well as examples of coins from the French Empire, British Empire, Nazi Germany and the Soviet Bloc. Notable items in the collection include a selection of Yugoslavian coins and notes from the 1960s to the 1980s, collected shortly before the Yugoslavian War; and a selection of modern British 50 pence coins showing a range of differing "special edition" designs those coins sport.