The Vanguard Movement or the VanMov (Also referred to as the Vanguard) is one of the 3 main political parties in the Nemkhav Federation. At 5 members across 3 Party Branches it is the second largest Party in Nemkhavia, the largest being the LFPP with just one more member. However, considering the electoral system within the Federation, controlling the single electoral votes of each State is far more important than gaining individual votes. It has been succeeded by the Vanguard for Freedom (Nemkhavia).

It can be hard to understand what exactly the Vanguard Movement stands for just by looking at its name. The VM stands for a few main points: Meritocracy (and to a limited extent Technocracy), Federalism, Direct Democracy and limited libertarianism. The Vanguard does not officially take a stance on economics, some members holding ideals from Socialism to even Capitalism.

We can not allow Society to be controlled by those who get the luck of the draw, Meritocracy is the only way to force people to earn what they want.

Nemkhavia was founded on the ideals of a limited federation, with extensive states rights. If we lose that, we have nobody to blame but ourselves.

— Samuel Azehtyla on the Founding of the Federation

The VM has always been a supporter of Federalism, that is, a weaker, less intrusive, Federation and stronger state governments. The VM always is in support of States deciding on all issues that don't effect the entire Federation. It also upholds that states may have any type of government they wish, may it be Authoritarian or Libertarian, Communist or Capitalist. One campaign promise made by Sam Azehtyla was that if elected, he would not pass any legislation that infringes on States Rights, unless the House of Territories votes unanimously.

We must hold that the Social and Political rights and freedoms of our citizens are of Paramount Importance.

— VM on Social and Political Rights

The VM has always supported extensive citizen Political and Social rights. It upholds that absolute free speech is the most important and necessary political right. It also holds that the notion of "copyright" is a inherently stupid idea, based on the fact that a persons chance good idea actually contributes to society. The Vanguard also supports the right of ordinary citizens to participate in Democracy, as seen implemented within Vians own Direct Democracy.

To better understand the VanMov's ideology, a political compass has been published, and is as follows: 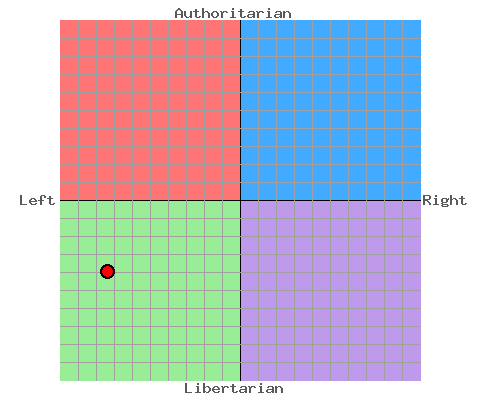 The VM has elected one Member to the Nemkhav House of Territories (Samuel Azehtyla) who is elected indirectly. Since the Vianese Political System requires the Caesar to be elected by the Senate for life and the Senators are elected, the Caesar serves as representative. This holds the characteristic of a monarchy though, as the Caesar holds the position for life. Azehtyla stood for the Presidency in the November 2011 Nemkhav Presidential Elections where he entered into a federalist electoral alliance with Sebastian Linden, another candidate, which entails that the votes of whichever of the two candidates gains less votes are transferred to the other after the election, increasing the chance that either of them is elected.

The VM has been active in local vianese politics as well, half of those who hold Senate seats are affiliated with the Party, and the Caesar himself is as well. All of these officers were elected o the day the Statutes of Vianese Law were passed. So far, with few acts passed, it is yet to be seen what an influence the VM will have on vianese politics, however it is presumed to play smaller role than on the Federal Scale as party politics arent very common within Vian.

The VM has been decently active in norovian elections as well, three of its five members are registered to that Party Branch. The VM has yet to announce if it will field a candidate in the Norovian Presidential Elections, however Chancellor Nikolaj I has expressed delight at the thought of a member of the VM being elected. Unlike in Vian, Party Politics run rampant in Norovia, by constitutional law you cant even be elected without being a member of a Party with atleast 3 members.

The Movement has one major affiliate, the Sovereign Order of the Open Book. Since its beggining it has been a supporter of Meritocracy, and in October 2011 its General Secretary became a member of the SOOB. After a quick motion passed days later thay became an affiliate of the VM.

It has also entered an electoral alliance with the Libertarian Federalist Patriots' Party, on the common ground of Libertarianism (Somewhat) and Federalism. This was decided in a conversation between Samuel Azehtyla and Sebastian Linden later in the night after elections were announced.

The Vanguard itself is divided between regional cells (known as People's Vanguards) within Nemkhavia, Norovia and Vian.

While each cell has considerable autonomy within the area they operate, they all report to the central Vanguard Movement and must obey the higher echelons of this central party. No cell is above any other.